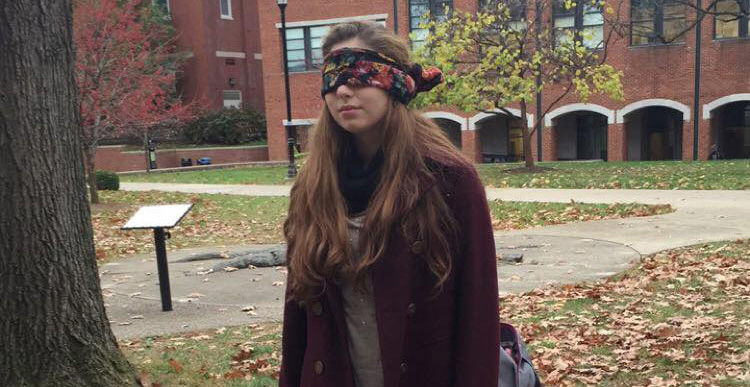 Syrians and Muslims around the world are trying to quash hate with hugs in lieu of major terrorist attacks and a burgeoning refugee crisis, and their efforts are making waves on social media.

Those efforts inspired Ranym Nenneh, a linguistics, psychology and business management sophomore who is studying abroad from Syria, to blindfold herself and stand outside White Hall Classroom Building on Thursday with a message written on a whiteboard at her feet that read, “I’m Syrian, but I’m not a terrorist. Do you trust me? I trust you. Give me a hug!” Nenneh received 15 hugs within 10 minutes.

“It was just an individual initiative,” she said. “With all the hatred … on social media lately, I felt that I needed to do something.”

Nenneh, who is half Syrian and half French, arrived at UK last year as a freshman study abroad student. She grew up in Damascus and was born into a Muslim family.

Nenneh took her cue from a video of a Muslim man in Stockholm that was published March 22 on YouTube. Although similar videos have cropped up across the globe since the Paris attacks, one of a Muslim man in Paris was posted to YouTube on Nov. 16 and went viral — earning more than 2.2 million views as of press time.

In both videos the men also stood blindfolded and solicited for hugs with proclamations of their faith in humanity scribbled in different languages at their feet.

“People have been insulting Islam for so long now and honestly I’ve never been offended, but when it came to Syria I did feel offended and I was like, ‘No, I need to take action,’” Nenneh said. “For someone who has social anxiety to begin with, being blindfolded just outside of White Hall — could you imagine how awful that would be?”

Nenneh’s role as an officer in UK’s Random Acts of Kindness Club made her feel like she could do something. Her friend Brittany Brown took photos and videos of the demonstration; they posted the content to Facebook and received praise and support for their efforts.

“I was surprised by the really good response that I had,” Nenneh said. “I hope that this would encourage other Syrians on campus or on other campuses to do the same thing.”