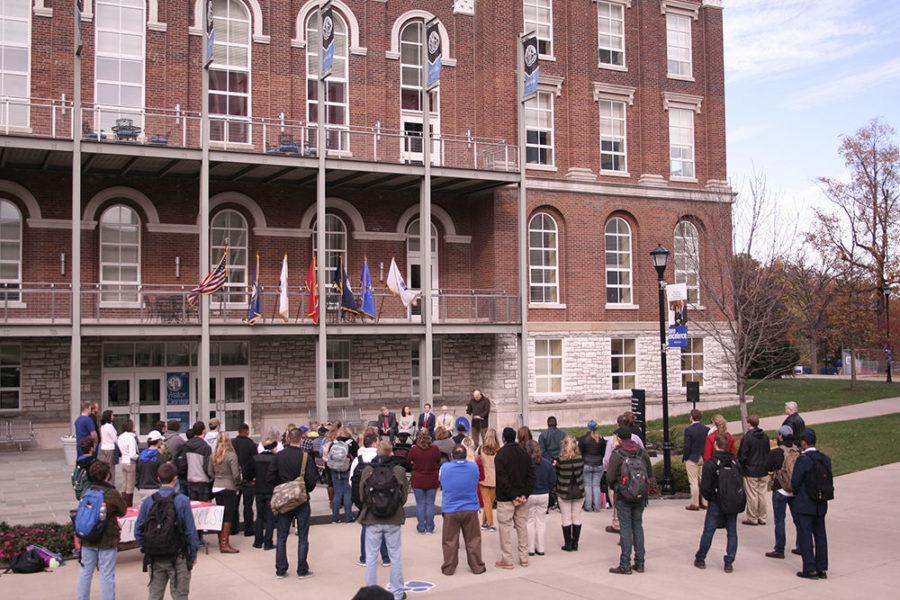 UK and the Veterans Resource Center thanked military members and student veterans for their service in a ceremony outside the Main Building on Wednesday morning.

“Today’s event is about thanking veterans past, present and future,” Wilson said.

After each speaker shared their remarks, many of them including personal stories and memories, attendees were invited to a free chili lunch in Buell Armory.

“To me, we are giving thanks to those who serve,” said Sgt. Jason Ball, an electrical engineering freshman who served in the Army National Guard. “Today, we are honoring those who have come through.”

VRC has hosted this annual event since opening in 2009. Before VRC, the Student Veterans Association was the only resource on campus that tended to the needs of student veterans. As SVA President, Wilson is often in the VRC office and works to build the community of student veterans.

“I wanted to be involved with the Student Veterans Association because it’s very easy to feel alone,” Wilson said. “It’s an opportunity to relate to other (veterans).”

VRC was created after U.S. Congress passed the Post-9/11 GI Bill, which provides full college tuition, books and living allowance to veterans who served at least 36 cumulative months. The aid decreases in increments for veterans who served for shorter periods of time.

According to the Veterans Affairs Campus Toolkit, more than 1 million student veterans used their GI Bill education benefits in 2013. The toolkit said this statistic is expected to increase by 20 percent over the next few years.

Although President Eli Capilouto was not present at the event, Capilouto posted about Veterans Day in his blog on UKNow this morning.

“I believe we are all humbled and inspired by our student veterans,” Capilouto said in the blog post. “(My wife) Mary Lynne and I want to thank all of our veterans in the Wildcat family for your service and for choosing UK.”