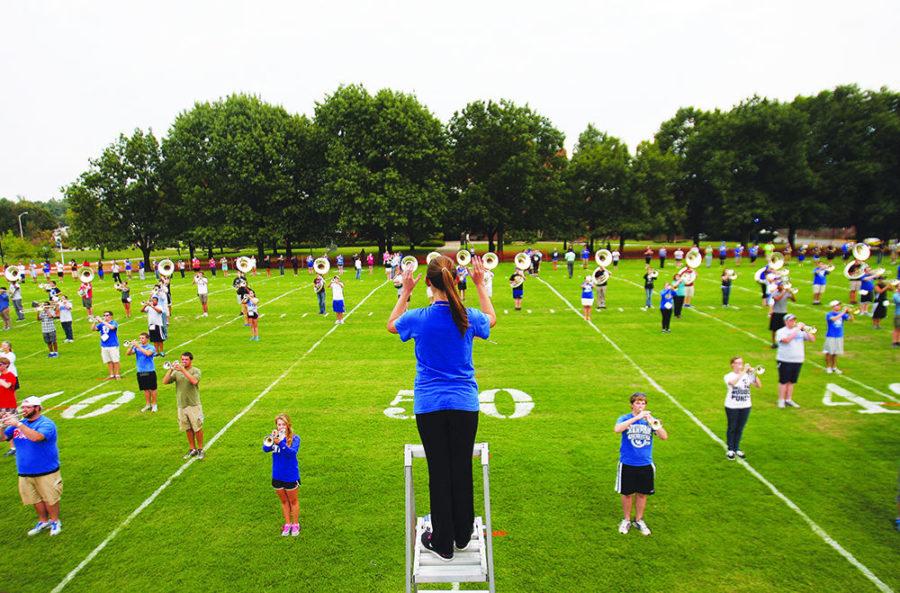 When the Wildcat Marching Band performs at football games, UK fans only see a few minutes of a performance that took hours of practice to perfect.

The marching band practices Monday, Wednesday and Friday every week from 5-7 p.m. on the field in front of Bowman’s Den. Additionally, they rehearse on game days about five hours before kickoff, which typically means they start at around 2 p.m.

“Game days are exhausting,” said Demetrius Walker, choral education senior and drum major. “But it’s worth it in the end because seeing the band perform is an excellent experience.”

During rehearsals, the band focuses on a variety of tasks, including preparing for the next performance and working on drill, which includes the formations.

“A typical rehearsal depends on what we’re preparing for, but we typically warm up, and then we learn drill or clean drill. There’s always the marching aspect,” Walker said.

For drum majors such as Walker, their job can be is even more time-consuming than the other members. Their tasks is include showing up seven hours before kickoff on game day, and organizing the band and its members.

“Basically my job is to get everyone there on time and make sure they are prepared and are doing what they are supposed to be doing,” Walker said.

Aside from performing at UK football games, some members of the band are part of the winter Pep Band that performs at women’s and men’s basketball and volleyball games. Though those involved in both seasons may feel overwhelmed at times, they said the rewards are worthwhile.

“Band never stops,” Walker said. “But it really teaches you time management, and it’s a creative outlet for everyday life.”

Besides time management skills, the band provides many other meaningful opportunities for students. For finance and marketing sophomore Ben Schneider, who is also a drum major, being a member of the marching band has been an important part of his college career.

“The marching band allowed me to come to school sooner than anyone giving me the advantage of making friends before I stepped foot into my first class. To this day, I’m still friends with all those people I met on day one, and I am forever in debt to the marching band for those experiences and friendships,” Schneider said.

Outside of the relationships and time management, marching band members are able to branch out into the community by performing at other venues.

“I’ve performed at a Cincinnati Bengals game, in exhibition at Bands of America Grand Nationals (a national high school marching band competition), and a number of road SEC football games, getting to experience the stadium atmospheres of universities such as Georgia, Tennessee, Florida, and Vanderbilt,” music education senior Aaron Hudson said.

The UK band program works each day to represent UK well and provide entertainment at games.

“I would encourage people to come watch a rehearsal. We’re hard workers, and we want everyone to see what goes into our performances,” Walker said.