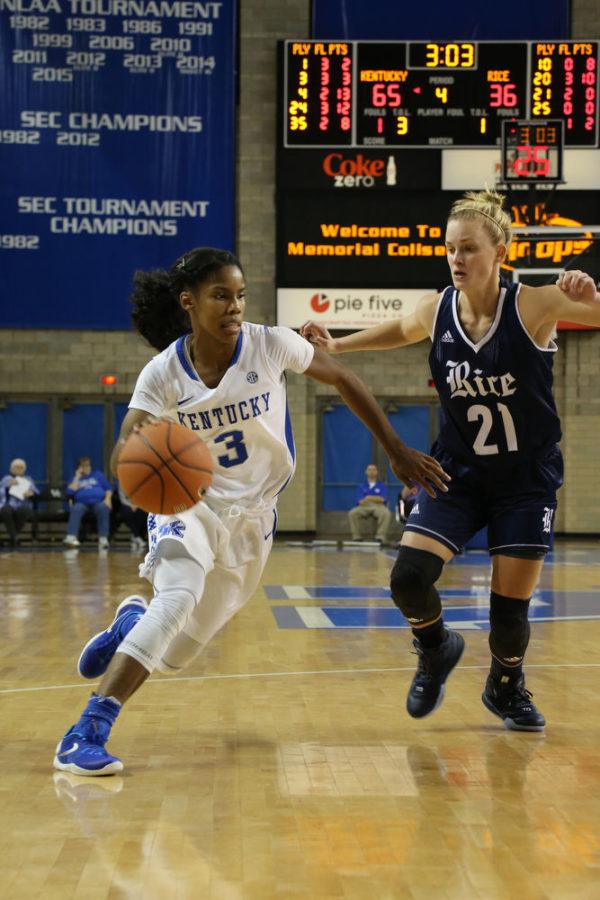 UK women’s basketball returned to Memorial Coliseum back from Thanksgiving break to take on the Jackson State Lady Tigers. The Cats improved to a 6-0 record in dominant fashion, as the team would go on to beat Jackson State 92-24.

With the win, head coach Matthew Mitchell moves to 200-81 (.711) and becomes the fifth coach in UK basketball history to reach at least 200 wins. Mitchell joins the likes of Adolph Rupp, Joe B. Hall, Rick Pitino and Tubby Smith with the milestone.

The final score was so due to the excellence the Cats showed on the defensive end, especially in the second half. UK allowed only seven points in the second half while forcing the Lady Tigers to shoot only 1-24, 4.2%, in that span and 7-45, 15.6%, for the game.

The Cats also forced Jackson State to commit a season high 37 turnovers. The team has been great at using their defense to create easy offense, and it showed again with 42 points off of  Jackson State turnovers and 14 fast break points.

The 68-point win was UK largest margin of victory since 2013, when it won by 60 points against Grambling State.

Junior Evelyn Akhator led the defensive effort for UK. The forward continued to dominate the glass by pulling down 13 rebounds to go along with her career high 20 points, leading the Cats in both of those categories. She also was active on defense, coming up with one steal and one block.

“I think she can be an All-American type player,” said senior guard Janee Thompson. “She has that athleticism and skill, and she continues to learn the game and picks her spots.”

Akhator’s athleticism continues to be a difference maker for the Cats as it allows her to have a forceful impact on both sides of the ball.

“As you all can see, her athleticism is sort of next level type stuff. She looks different than everybody else out on the court a lot of times,” Mitchell said. “She’s just tremendously athletic. She’s real aggressive on the boards and real strong.”

The guard play also continued to be a reliable source of offense, especially when looking at veteran leaders like Thompson and junior Makayla Epps. The combo combined for 16 assists while also contributing 27 points, with 15 coming from Thompson and 12 from Epps.

With the amount of guards and post players UK has, spacing for driving lanes and post ups can be a concern if there is not a reliable shooter on the team. Thompson has stepped into that role for the team by going 3-5 from three in this game and shooting .481 from three for the season.