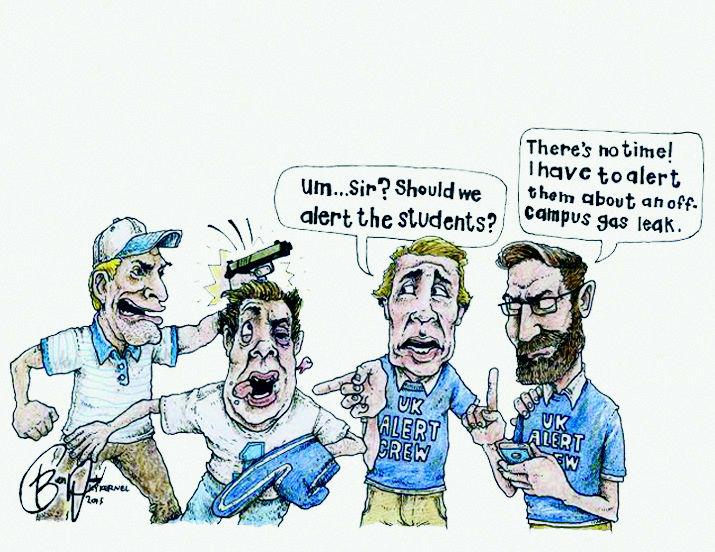 Though a UK student was shot Tuesday in his apartment at University Trails, students received no UK Alert or email notification. The first time students found out that another student had been shot was when the Kernel reported it. This is an unacceptable standard for UK.

The Kernel recently published an editorial supporting the university’s decision to not send out a UK Alert after a UK fan was charged with pistol-whipping two people following the UK vs. University of Louisville football game.

The editorial board agreed that because the situation was immediately controlled, an alert was unnecessary.

Paul Gregory Walters, the man charged in the pistol-whip incident, fired no shots and was immediately detained. Not sending out an alert was perfectly understandable, as nothing would have been accomplished other than frightening students for no reason.

But shots were fired on Tuesday, a student was shot in the abdomen and hospitalized, and the suspects remained at large as of Sunday evening. Students had a right to know.

UK Police Chief Joe Monroe said no alert was sent out because University Trails is too far from campus, but the area is highly populated by UK students and is only about one mile from campus.

Students in the area should have been notified so they could have taken necessary precautions, such as getting inside to a safe location and locking their doors.

David Stephens, the student who was shot, said he was surprised UK did not send out an alert.

“Anybody could have been in danger,” Stephens said.

Monroe said UK Police would have informed students through an alert if the shooting had happened a year ago, when UK still had a contract with the apartment complex.

This is not the first time UK did not send out an alert during a situation involving a gun.

In November, police arrested a suspect who threw a gun into a bush near student apartment complexes on Angliana Avenue.

Police arrested the suspect after a foot pursuit. No shots were fired, but the suspect was arrested at 9:30 p.m.

Students were not allowed back in the gated apartment complex until 10:50 p.m.  Again, UK sent no altert or notification.

If the issue is that these instances involving firearms are occurring in areas outside of the UK Alert’s range, then UK should expand the alert’s reach to include areas heavily populated by students. Doing so will ensure the safety of students, as the program is intended to do.