UK building toward March in win over Louisville 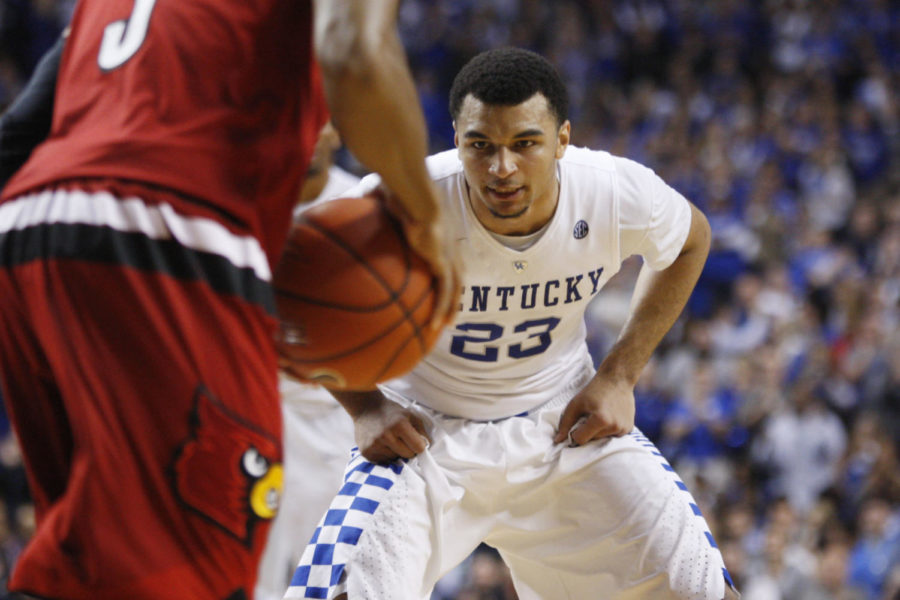 No. 12 UK held off a late push from No. 16 Louisville to win its fourth consecutive game against the Cardinals, and there were plenty of takeaways that show the Cats are ready to turn the corner in preparation for March.

The Battle of the Bluegrass proved to be a back-and-forth fight for the majority of the game with both teams starting a little tight, committing some uncharacteristic turnovers and forcing shots. But there was one constant throughout the game – the Rupp Arena crowd.

Big Blue Nation was loud and proud, even when the Cats were down by five with about six minutes to go in the first half. All they needed was a spark, something to go crazy over. Senior forward Alex Poythress gave them one. Well, he actually gave them a few.

Poythress played his tail off on both ends of the court, throwing down hammering dunks on one end and sending U of L shots into the bleachers on the other end. The senior finished with 14 points, six rebounds and three blocks.

Head coach John Calipari knows that’s the type of production he needs from Poythress for the team to advance in March. The UK coach was so pleased he even compared the senior to Superman.

“We put Alex in the middle and told him to attack. That’s what he did,” Calipari said. “Then I love the fact that Tyler (Ulis) just threw him the ball down low and he posted and he was – Alex is an elite athlete. Did you see the block he had coming down in front of our bench? It was ridiculous. Only Superman can make that play. And he made it.”

He wasn’t the only Cat to show promise moving forward though. Point guard Tyler Ulis had to help fill the void of the injured Isaiah Briscoe, and he more than exceeded expectations on Saturday. Ulis finished with arguably his best game this season, producing 21 points, eight assists and one turnover.

He was quick to point out after the game that it was the play as a team that got the win, not his individual play – an additional quality that great tournament teams have.

“It was a great team performance and we came out with a lot of energy from the jump ball,” Ulis said. “As a team I feel like we really played hard and that’s what got us the win.”

Another positive sign for UK: the team shot the ball exceptionally better than it has this season. Going into Saturday’s game, the Cats were shooting 29.7 percent from behind the arc. Against U of L, the team shot nearly 50 percent (11-of-23) from three.

And some of the credit for the boost in three-point shooting goes to Kentucky natives Dominique Hawkins and Derek Willis. The two combined for four of the Cats’ 11 made threes, and Hawkins even poured in a career-high 13 points in the process.

“(Hawkins) never changed his emotion the whole time. He defended, he’ll fight like crazy, he’s got a great temperament, a great demeanor,” Calipari said. “One of the great kids of all time. I mean literally one of the great kids.”

Role players playing to their potential is without a doubt an ingredient for a late push in March, and seeing it Saturday from both Hawkins and Willis is a gift Calipari might not have expected to receive in late December.

But Saturday’s rivalry game wasn’t all perfect for the Cats. U of L out rebounded UK 39-29 and forced 15 UK turnovers – one which came on UK’s last possession of the game and gave the Cardinals a chance to win or tie with 12.5 seconds to go.

Despite the few hiccups UK had late in the game, Saturday’s win over U of L proved the Cats are beginning to turn the corner (if they already haven’t) to become the team it can be in March.

“They do know this is who we have to be and how we have to play. That kind of energy, that kind of aggressiveness, that kind of attack, that kind of loose offense, how we played,” Calipari said. “That team, Louisville’s going to do damage and I don’t know how we’ll finish, but they will be one of those teams left standing. We may have them again.”

Still unsure about how this year’s team will finish? Here’s what Calipari’s teams have done through December and where they finished the season.

Hint: If history is any indication of the future, this year’s team is shaping up to make a deep run come March.

UK teams under Calipari through December