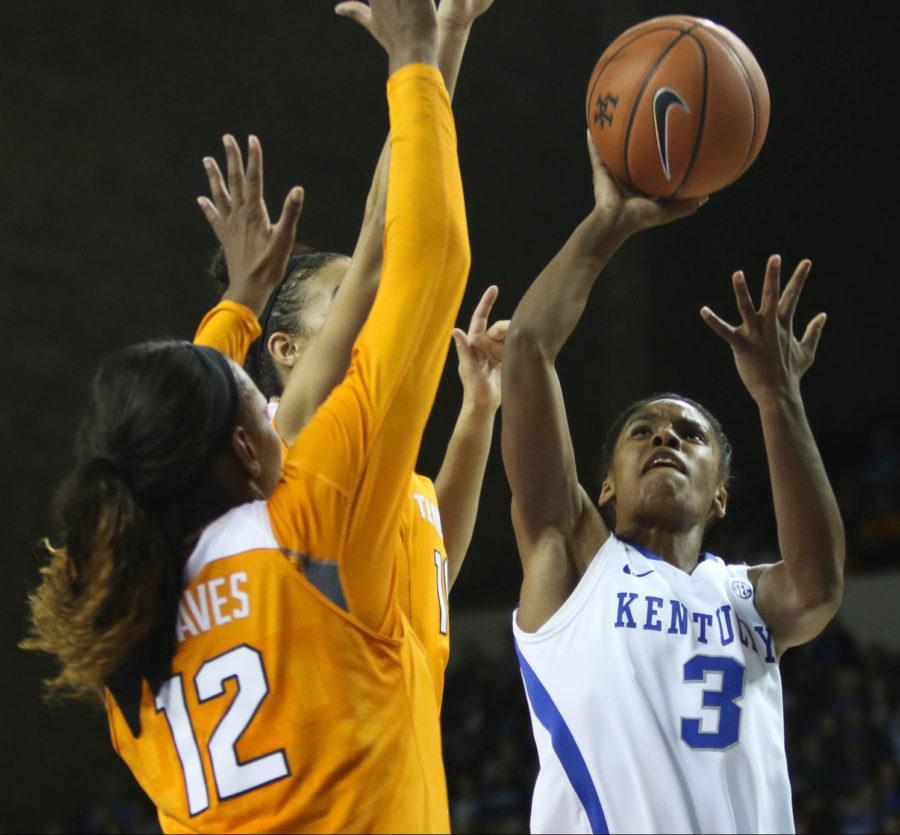 Senior guard Janee Thompson (3) shoots the ball during the game against the Tennessee Volunteers on Monday, January 25, 2016 in Lexington, Ky. Kentucky won the game 64-63. Photo by Hunter Mitchell | Staff

The No. 12 UK women’s basketball team came out hot and ready to play in Thursday night’s game hosting the unranked Vanderbilt Commodores. The ending, however, was a heart-breaker as Vanderbilt came out with victory on UK’s home court, 71-69.

“This was a very difficult matchup for us in essentially a short period of time,” Head Coach Matthew Mitchell said. “We just have to stay the course.”

The Cats led the Commodores at the end of the first quarter, 20-11, shooting 62.5 percent and doubling Vanderbilt’s rebounds. The Commodores three-pointers, however, made it a close ball game in the second quarter.

Rebekah Dahlman went 2-2 in the second quarter behind the arc for Vanderbilt while teammate Rachel Bell helped her out with two more threes. An and-one and a made free throw by Marqu’es Webb gave the lead to the Commodores with 43 seconds left right before UK’s Janee Thompson came back with a clutch three to tie the game 34-34 at halftime.

UK did not play the third quarter like they did against Tennessee. Vanderbilt scored six points including a three by Rachel Bell to lead the Cats by seven points.

The last two minutes of the game was stressful on both ends of the court.

“Reed had some really open looks,” UK’s Makayla Epps said about Vanderbilt’s Christa Reed. “Some of them dropped and some of them didn’t.”

But the ones that did drop made all the difference.

“I just knew I had to get the shot up,” sophomore Christa Reed said. “She backed up and gave me the space so I shot it.”

Reed hit two three-pointers in a row to give the Commodores a five-point lead late in the fourth quarter. Coming into the game, Reed was shooting 44.8 percent from the three-point range so to no surprise Coach Melanie Balcomb said after the game, “That’s who we want shooting the ball.”

Reed led the Commodores with 19 points, including five three-pointers. Along side of her was Rebekah Dahlman, who added 18 points for the Commodores, and a third player in double digits, Rachel Bell with 15 points.

For the Cats, Makayla Epps led the team with 25 points while Janee Thompson added 14 points. Both Evelyn Akhator and Alexis Jennings added 12 points as well in the loss. The two also combined for 11 rebounds for the Cats.

“We can’t hang our head right now, we need to understand it’s going to take hard practice and diligence,” UK Head Coach Matthew Mitchell said. “We’ve got to be a resilient bunch now. There will be brighter days ahead.”

The Cats will hope to find those brighter days as four of their next five games are on the road starting with Florida on Sunday.