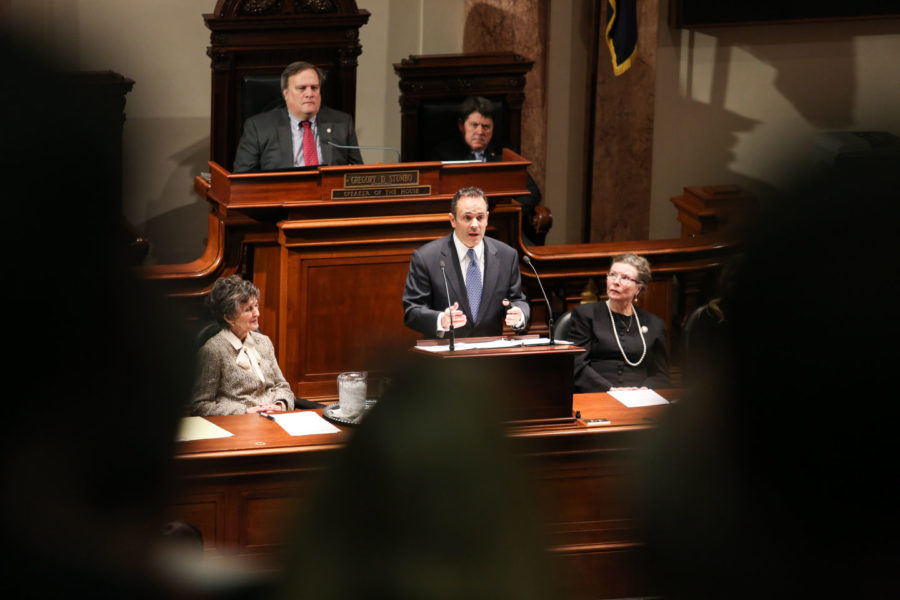 Kentucky Gov. Matt Bevin addressed the Commonwealth with his budget for the next two years on Tuesday, Jan. 26, at the Capitol building in Frankfort. The budget included a $110 million cut from UK's state general funding over the next two years.

Governor Matt Bevin’s budget announcement met criticism from the liberal arts community for the proposed cuts to the Kentucky Arts Council and his comments on liberal arts education.

His statement that science, technology, engineering and math fields would be incentivized, because they were practical and desired, struck a chord with French literature professor Jeffery Peters, who penned a column in the Kentucky Kernel and the Lexington Herald-Leader in response.

“Another irony, on the very day the governor made the state of the state address there was a representative from the Kentucky Department of Education who came to speak to my department,” French literature professor Leon Sachs said. “(He told) us how important world language and culture training was, and going to continue to be for Kentucky, for its economic future.”

Bevin’s cuts to higher education are not specific to one area’s funding, but his distribution of money from the Kentucky lottery, which he promised would not be diverted from scholarships to the state’s general fund, goes in large part to programs that favor STEM disciplines.

“Unfortunately it says that the governor is pretty misinformed about higher education and what language majors, literature majors and, by extension, all humanities majors go on to do with their lives, and for Kentucky,” Sachs said.

In his op-ed, Peters mentioned many of his students who used their mastery of language to become successful as physicians or scientists. Sachs said he was supportive of STEM students, but he has seen many leave what Bevin referred to as “practical” majors because they were not prospering.

“Research shows that people want and need a wide variety of intellectual and academic paths,” Sachs said. “In languages and literature, we get a lot of students who started in STEM disciplines because of some pressure to do so … and then they find themselves unhappy.”

“If the governor subsidizes what are supposedly more practical majors — engineering or STEM — and not other majors — literature or the arts — that’s going to make the humanities the privilege of the wealthy,” Sachs said.

The newly crowned Miss UK Alex Francke, who created a nonprofit that provides liberal arts programs to underprivileged elementary schools that lack the funding, said the cuts were not surprising, but would further disadvantage students.

“New research is coming out every day about the importance of the arts in early elementary education,” Francke said. “We are going to need more people spreading awareness … for our government officials and legislators to see that they are relevant and valid.”