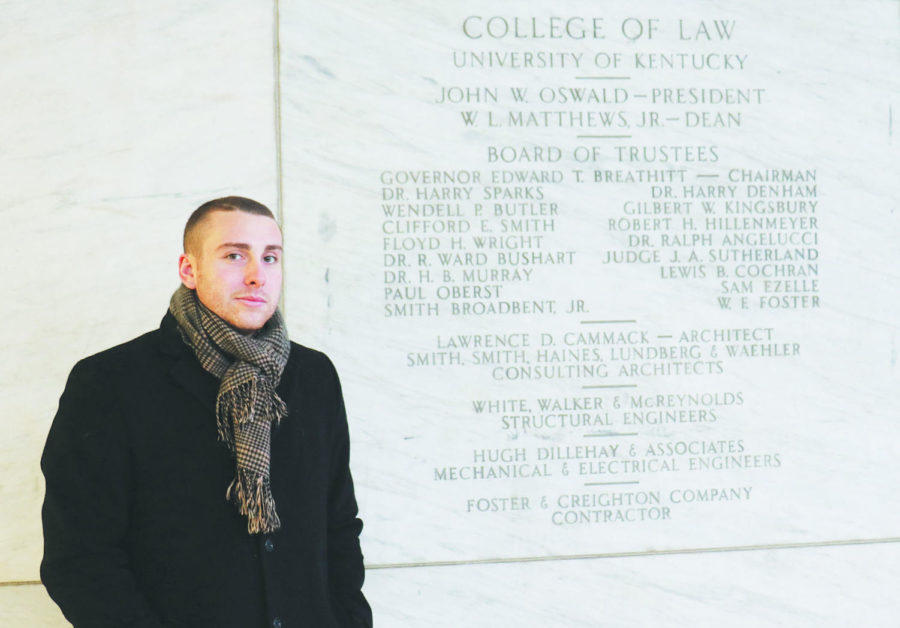 Peyton Wilson, who crashed a drone inside Commonwealth Stadium during a UK football game, was charged second-degree wanton endangerment, a misdemeanor offense, but his charges were reduced to third-degree criminal trespassing.

Joshua Qualls
After months of silence, the UK law student who crashed a drone into Commonwealth Stadium during the first game of the 2015 football season has decided to speak out.
Following the incident, UK Police Department charged Peyton Wilson, a 24-year-old second year law student, with second-degree wanton endangerment, a misdemeanor offense. Wilson made a plea deal Jan. 6 and his charges were reduced to third-degree criminal trespassing, a violation similar to a parking ticket.The incident is still under investigation by the Federal Aviation Administration.
“The resolution and plea reached in this case speak for themselves,” UK spokesman Jay Blanton said.
Though UKPD pressed charges against Wilson, he was not suspended or expelled.
Instead, the administration summoned Wilson to a student code of conduct hearing, where he had a long conversation with Denise Simpson, director of the Office of Student Conduct. Simpson ultimately determined that Wilson did not violate the student code of conduct, he said.
Wilson’s journey with drones began, like many other enthusiasts, when he became fascinated with remote controlled vehicles as a kid. After years of not owning or using remote controlled devices, he read in a property class about the legal circumstances surrounding drones, which fed into his interest with aerospace law.
“It just kind of opened my eyes to the possibilities that are drones, and the positive economic impacts that they can have,” said Wilson, whose familiarity with apps and smartphones from working at places like Best Buy and T-Mobile helped him become accustomed to the technology.
Wilson cofounded Aerora Inc., a marketing company that uses drones to film events and landscapes, with a college friend about six or seven months ago. However, he said his focus has mostly been on the business and legal side of things.
“I am not the best pilot that has worked with Aerora Inc.,” Wilson said.
Wilson recreationally operated the drone, a DJI 1 T600, while walking in a parking lot across Alumni Drive from the stadium, having wanted to see the top view of the stadium during the first game of the season. He attended a tailgate party before the incident, but he said he did not drink alcohol while he was there.Wilson said he thinks his controller lost connection with the drone because of interference from other wireless devices around the stadium, but he does not know for sure.
The drone had a “return to home” function, which means that it was supposed to level itself out at a preset altitude and return to a preset location, but that also did not work.Drones are preprogrammed and regularly updated with FAA flight parameters, which would typically prevent drones from flying into areas where they are not supposed to operate, Wilson said. He was not aware of the crash until he approached a police officer to identify himself as the drone operator and make sure that nobody had been harmed because of the lost connection.
FAA policy restricts aircraft from flying in an area within three miles and up to 3,000 feet of special events. It also advises recreational drone operators against flying near people or stadiums, flying above 400 feet or flying within five miles of an airport.
Commercial operators can get FAA approval to use drones outside these parameters; Wilson’s company has a level of FAA authorization, but UK did not contract its services and Wilson was not operating the drone in that capacity.
Wilson said he advocates for the technology because it could be useful to people in a wide variety of ways.
“What I did is set a precedent in the field,” Wilson said. “Drone operators out there know that if they don’t have permission and they do land on a person’s property, that (criminal trespassing) is what you can expect — not wanton endangerment.”
Delete Image
Align Left
Align Center
Align Right
Align Left
Align Center
Delete Heading