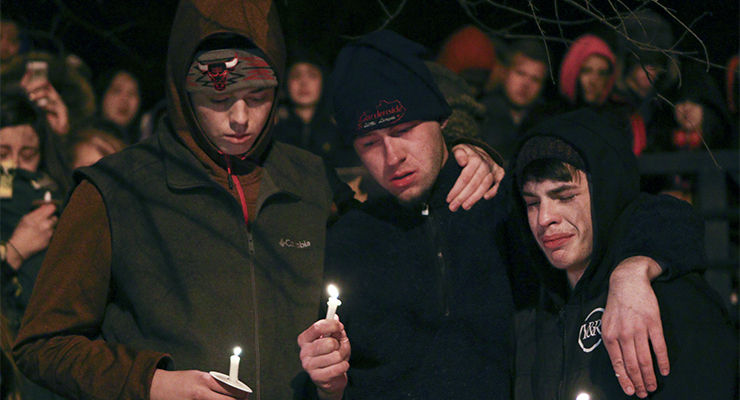 Friends of Caleb Hallett mourn during a memorial candlelight vigil on Jan. 11. Hallett, a Lafayette High School senior, was the third person to be killed in Lexington this year. Photo by Joel Repoley | Staff

The Lexington Police Department held a press conference Wednesday afternoon to go over the status of several pending murder investigations.

In January, there have been 10 gun-related incidents in Lexington including six assaults and four homicides.

The first homicide took place Jan. 1 at 432 Roosevelt Blvd. Police Chief Mark Barnard said the victim left his residence to meet someone after receiving a phone call sometime around 2 or 3 a.m., and that was the last time he was seen.

Barnard asked for anyone who has information to report it to LPD or Crimestoppers.

“Why the victim left the house is what we’re trying to determine,” Barnard said.

This case is still under investigation.

“The other cases right now we have firm suspects, in that we’re looking at, have made an arrest or hope to make an arrest soon,” Barnard said.

The second homicide took place Jan. 3 at the University Trails apartment complex on Red Mile Road. Barnard said the victim and the suspect knew each other and went to a party with one other person.

Police have arrested the suspect, and this investigation has been turned over to the Commonwealth Attorney’s office.

The third homicide took place Saturday on the 200 block of University Ave. LPD has obtained arrest warrants for Kenyon Hipps, 21, Marquess Smith, 18, and three 17-year-old males in connection to the investigation at 213 University Avenue.

Officers responded to a call at the location at about 3 a.m. Saturday. Police found two gunshot victims inside a vehicle, including Caleb Hallett, a Lafayette High School senior who later died at UK Chandler Hospital.

Barnard said the suspects approached the victims. Two of the unnamed juvenile suspects are in police custody, but the other three remain at-large.

Barnard said the location on University Avenue is known to police as a high-risk area. Brenna Angel, a spokeswoman for the LPD, said the suspects were targeting the address itself, not the victims.

“This was a high-risk house that we have looked at before and that we’re still continuing to work on,” Barnard said.

LPD has also turned over this case to the Commonwealth Attorney’s office.

The most recent homicide took place Tuesday on the 1400 block of Russell Cave Road. While the investigation is underway, police know it was not a random act — the victim and the individual knew each other. Barnard said LPD is confident an arrest will be made soon.

“It’s a very fluid investigation,” Barnard said. “The investigators are out in the field.”

LPD and the Commonwealth Attorney’s office are concerned about an increase in gun-related crime.

Larson’s office has been tracking 93 pending gun-related cases since Jan. 1.

“We know two things about criminals and custody: when they’re on the streets they commit crimes, and when they’re in custody they don’t,” Larson said. “We owe more to the good guys in this town than we do the bad guys.”