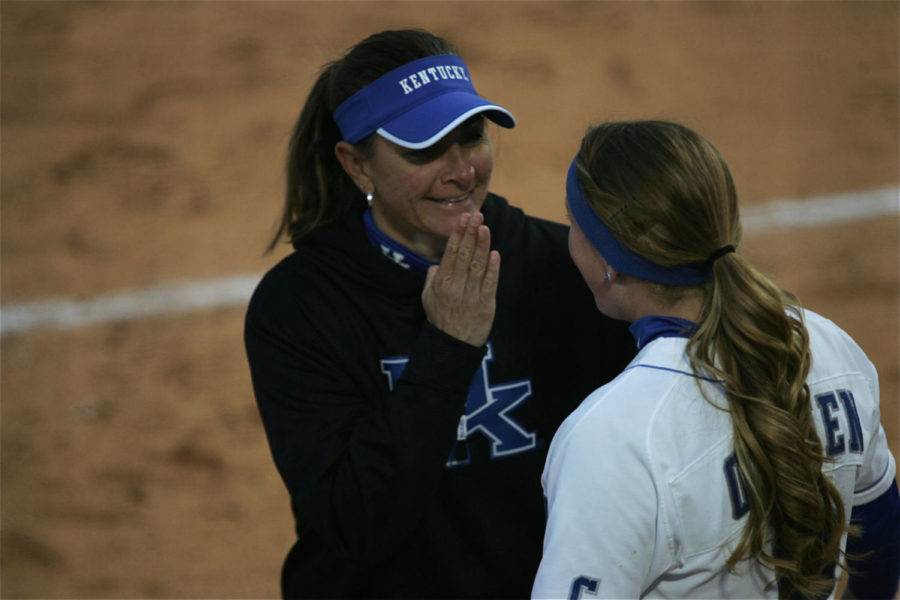 Head coach Rachel Lawson talks to senior outfeilder Alice O'Brien at the UK vs. WKU game at the softball complex in Lexington on March 19, 2013. Photo by Michael Reaves | Staff

Under the direction of head coach Rachel Lawson, UK softball has high aims for its 2016 campaign. With the success had in previous seasons, it is easy to see why sights would be set so high.

During Lawson’s coaching tenure at UK, she has produced three Regional appearances, three Super Regional Appearances, and one Women’s College World Series appearance. This season, she also returns several key players that will aid her Cats’ efforts to reach the WCWS.

This year is speculated to be no different, as the Cats were named No. 18 in the preseason poll. The poll also lists SEC members highly, holding eight of the top 25 spots, and four of the top five spots. Florida is ranked number one, Michigan at second, LSU in third, Auburn holding fourth, Alabama in fifth.

UK is slated to face six top-25 teams during the season, along with four more teams receiving votes. It will another challenging course for the Cats, but it’s nothing Lawson believes her team can’t handle.

“And then you start to think – OK – national championship. What is going to bring Kentucky a national championship? I couldn’t have talked about this four years ago, but I can talk about this now,” Lawson said. “We are now at the point where going to Super Regionals is a great thing, but we are from Kentucky. That is what we are expected to do here. We are supposed to win championships — and right now we are here trying to find out how to win a championship. The only way that we can do that is with a deep pitching staff.”

Lawson certainly has that key pitching staff as the Cats return several starters. The group is lead by senior Kelsey Nunley, the leader of the pitching rotation from last season. Nunley, who had a 2.42 earned run average in 2015, also allowed an impressive .229 opposing batting average.

She has also broken the school record for career wins with her 69th win coming last year, where she pitched nine scoreless innings with nine strikeouts to capture the record-setting win against Western Kentucky. Nunley was most recently named Preseason All-SEC for the upcoming season.

Another key in the rotation is sophomore Erin Rethlake. Rethlake Finished the year with a 2.85 ERA and 4-1 record in 51.2 innings pitched. She is one of the fastest on the team and has the ability to play outfield.

On the offensive end, batters will have a lot of experience in big games. With just two seniors last season, underclassmen were able to see plenty of time on the diamond and in the batter’s box.

Brooklin Hinz started 42 games last season, either playing left field or taking the designated hitter role. Rachael Metzger played behind the plate for 19 games as well as hitting two home runs and tacked on six runs batted in. Breanne Ray hit for a .226 average along with four doubles, six home runs and 25 RBI.

The incoming freshman class also hopes to provide a boost for the Cats. Abbey Cheek was a standout from the state of South Carolina, who drew 30 walks her senior year due to her dominance at the plate.

And from the Commonwealth of Kentucky, the Cats added Kelsee Henson, Madison Kearschner and Sarah Rainwater, who each led their teams to Regional tournament play.

“Now, the question for us is are we going to be able to take everything that we’ve done in the offseason and transition that to the playing field. I guess we are going to figure that out on Friday,” Lawson said. “And then, once we figure that out, are we going to be able to sustain that through the season and go through the gauntlet of the SEC, which is by far the best conference in the country and finish things off in the Women’s College World Series and do it on the final day.”

UK faces Notre Dame on the road for the Kajikawa Classic in Tempe, Arizona, on Friday. The Cats will have their home opener on March 9.