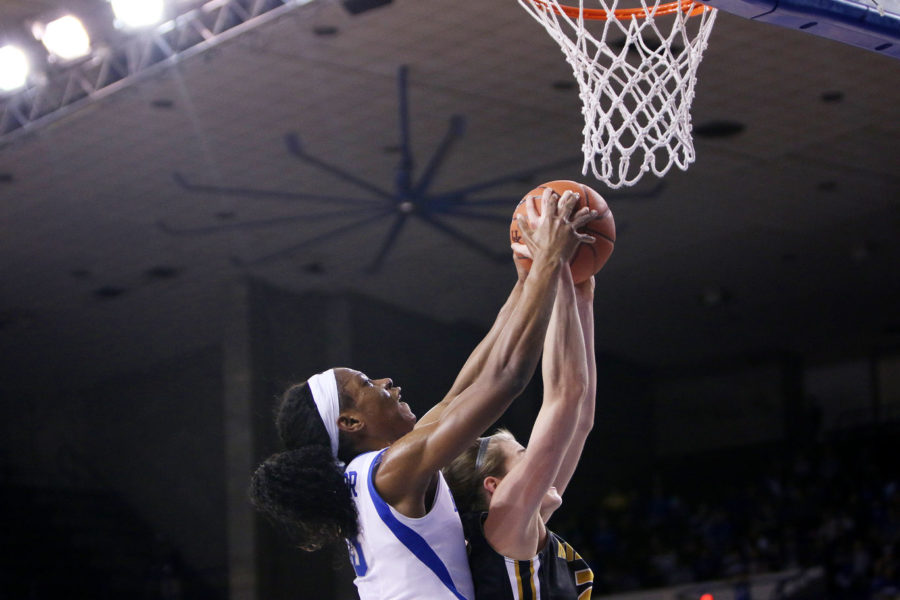 The Memorial Coliseum crowd was electric well before tipoff and through the final buzzer to celebrate the final home game for beloved senior Janee Thompson.

It’s been a long and impressive run for the senior out of Chicago, Illinois, who has been a fan favorite from the get go. After suffering a torn ACL midway through last season, the Big Blue Nation looked forward to seeing her come back strong in her final year as a Cat.

After averaging 12.6 points per game this year, it’s safe to say she was able to accomplish that.

Thompson finished out her final home game with a bang, scoring a career-high 24 points and tossing 3 assists. As she checked out for the last time at Memorial Coliseum, Thompson received a well-deserved standing ovation, the perfect closing to a storied career as a Kentucky Wildcat.

Junior Evelyn Akhator made her mark on the game early in the first quarter, finishing with 8 points in the first 10 minutes of the game. She finished the game with an impressive 15 points, nine rebounds, and a block in 28 minutes of play, making key plays throughout.

After an eight-point lead in the first quarter, the Tigers crept back, chipping away at the UK lead. The effort would come to no success, however, as the Cats were able to finish the half strong on a 5-0 run, pushing the lead out to 13 points at the break.

At halftime, UK maintained a comfortable 39-26 lead. Fantastic defense was key for the Cats in the first half, as UK held Mizzou to 34.6 percent shooting, while shooting 45.5 percent themselves.

Though junior Makayla Epps fought to keep the Cats out in front, the rest of the team started out the second half more sluggishly. Epps converted on back-to-back and-ones in the third, two baskets of her 14 total points, but it wouldn’t be enough to stop the Tigers’ third quarter momentum.

After leading by as many as 13, Missouri took the lead with a big three with 2:06 remaining in the third quarter, edging ahead 47-46. Maci Morris responded with a free throw line jumper to take the lead again, 48-47. The two teams then traded baskets to end the third, including a full court run out score by the Tigers to take a one point lead going into the fourth.

Thompson started out the fourth with a momentum swinging and-one to take a 53-51 lead. “Go Big Blue” chants erupted, sparking a much needed momentum shift. An energized Thompson then hit a three-point dagger to spread the lead to five points, and the Cats never looked back.

Twelve fourth quarter points for Thompson helped push the lead to 12, 69-57, before being subbed out for the final time at Memorial Coliseum with 33 seconds remaining.

“Janee is one of the best seniors to ever play here,” UK head coach Matthew Mitchell said.

Though the lights and cameras were on Thompson following the game, Mitchell wanted to emphasize this wasn’t her last game as a Cat, and to get excited for the remainder of the season. “We’re just getting started,” he said.