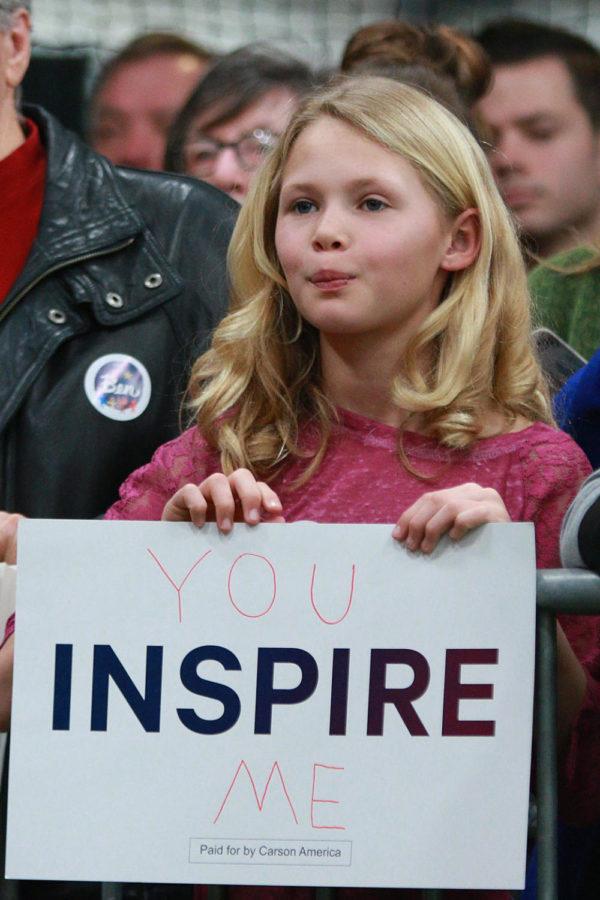 In preparation for the Republican Caucus this Saturday, Dr. Ben Carson held a Town Hall in Lexington to rally voters and talk about relevant issues for Kentuckians.

Carson’s anecdotes on being raised in a single-parent household and his mother’s perseverance segued him into the need for Americans to generate a “can do” attitude toward health care, welfare, gun control and the national debt, where he thinks the country’s greatest problems lie.

“If someone doesn’t accept your excuse, you stop looking for excuses and you start looking for solutions,” Carson said in his speech. “I have no intention of withdrawing support for people who actually need it, but I would really like to do is provide matters of opportunity so that people can climb from a state of dependency and become independent members of our society.”

Carson likened issues in the prison system to issues in welfare programs, and said that they encouraged a cycle of poverty and dependence on the government because minor offenders receive no rehabilitation and citizens are not encouraged to improve their economic standing.

“This is a problem for our society,” Carson said. “The incentive should be just the opposite, because the greatest promoter of poverty is being raised in a single-parent home.”

Instead of turning to the government, Carson said non-profits offer opportunities for women to further their educations or seek employment, instead of relying on government handouts.

Carson urged the people to rally behind the idea that with a different attitude, anyone could change, referencing his often heard anecdote in which he nearly stabbed a man, went and prayed inside a bathroom and left a calm man who no longer struggled with anger.

“I think the really big concerns are financial concerns, obviously that’s the case for everybody these days,” Carson said. “The interesting thing is that to turn it around, I don’t think it is going to be difficult at all. It’s a matter of creating a situation that encourages entrepreneurial risk taking and capital investments. It’s not hard.”

When asked about his chances of securing delegates in the primaries, he said people would be surprised. Carson has slipped in the polls behind Senators Marco Rubio and Ted Cruz, and businessman Donald Trump, but said he had no intention of suspending his campaign as of Monday.

Engineering freshman Nima Mahmoudi and biosystems engineering freshman Adler Rosenberger came to the town hall to become more politically involved because they feel, despite the apathy typical of their age group, they have a responsibility to vote and be educated on the candidates.

“2016 is a defining point for the future I think. Some things have been going right the last eight years, some things haven’t,” Mahmoudi said. “Every candidate has their views. We all know how some people like to make big noises and some people are quiet. Dr. Carson, I like his passive approach to everything. What he speaks for and what he believes in is interesting.”

Rosenberger said he is disappointed that Trumps’ more vocal approach has favored him and decreased Carson’s chances.

“In the last year I’ve become really politically inclined,” Rosenberger said. “I think this is just a great opportunity to see a presidential candidate, even if he’s not really big in the ratings right now.”