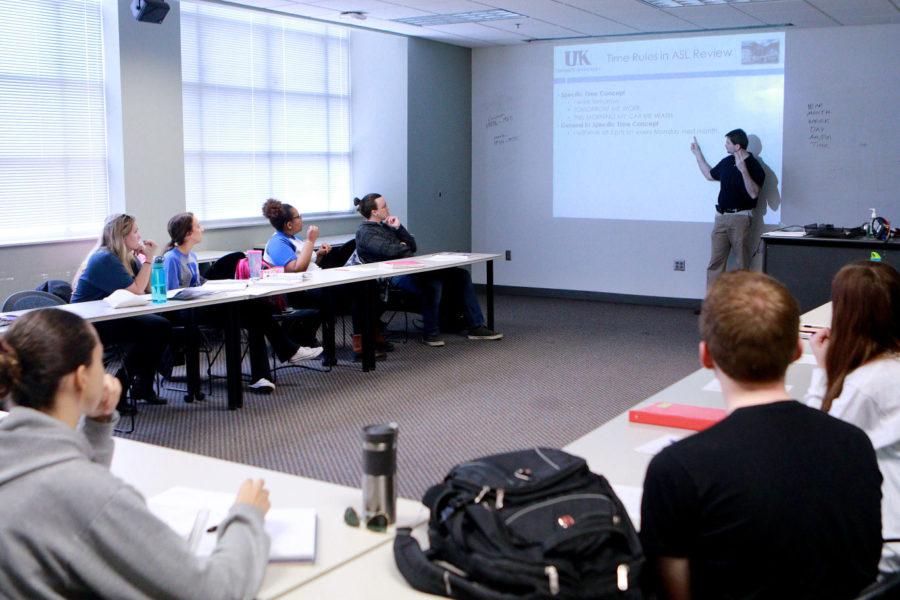 Save for the rustling of papers and the shuffling of feet, UK lecturer Anthony Isaacs’ classes are completely silent.

Students ask questions without moving their lips, and they are fixated on Isaacs’ every move. There is no dozing off in a class where the instructor speaks with his hands.

He teaches UK’s four American Sign Language classes, which are scheduled to be cut after the conclusion of the fall 2017 semester.

The cut was met with disappointment from students, especially those in UK’s American Sign Language Club, which boasts 132 members.

ASL Club President Peyton Pruitt and other club members have garnered more than 950 signatures between two petitions to stop the cuts. They hope the petitions will show how much of an impact these classes have had on the students’ lives.

The decision to cut sign language classes, which are within the College of Heath Sciences, was made thoughtfully and was based on the college’s strategic priorities, according to a statement from Scott Lephart, dean of the College of Health Sciences.

“As a college, we must be — and we are — focused on the academic initiatives, courses and programs that will maximize the success of our students who we are preparing for careers in diverse and competitive fields in health sciences,” Lephart wrote in the statement.

UK spokesman Jay Blanton said classes were not phased out to compensate for budget cuts from the state.

“It’s about priorities going forward,” Blanton wrote in an email to the Kentucky Kernel.

Pruitt said the classes were “empowering” and built up her confidence through the cultural interactions required in the course — when students go to deaf community events and speak in sign.

For Jake Mauchline, a media arts and studies senior, the classes allow him to better communicate with his deaf brother.

Mauchline lost much of his ability to speak sign language during his fours years in the military, when he was stationed in Japan.

Isaacs said many students have come to him with concerns about the cuts. His classes fill up quickly — biology junior and secretary of ASL Club Sarah Mac said some ASL classes will fill up minutes after the registration window opens.

Pruitt said she and other students in the ASL Club do not hold the College of Health Sciences responsible for the cuts.

She and other students want to move the courses to the College of Arts & Sciences’ Modern and Classical Languages, Literatures and Cultures Department. They are meeting with administrators in hopes of finding a home for ASL classes, and in hopes of keeping Isaacs on campus.

For Pruitt, knowing sign language will help her if she chooses to become a speech therapist. Expressing emotions through movement is one of the best ways to help children with communication problems, Pruitt said.

For Mac, knowing sign language has allowed her to participate in some of the most meaningful relationships of her life.

At a camp for deaf and blind children, Mac was able to be the interpreter between a fully deaf girl and a fully blind girl. Without Mac’s knowledge of sign language, the two girls may have never become friends.

“I can’t put into words how amazing this experience was,” Mac said. “This is something I love just to love it.”