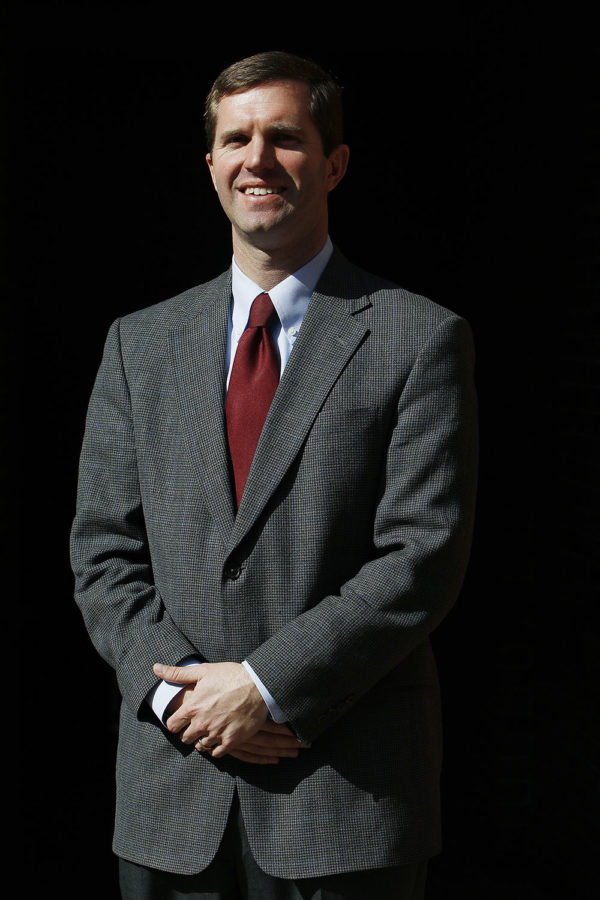 When the Beshear family gathers around the dinner table, politics is just one of the subjects they discuss — others include the Beshear children, sleep and the UK Wildcats.

But titles like “former Kentucky governor” and “current Kentucky attorney general” are insignificant compared to the title of “5-year-old child,” according to Kentucky Attorney General Andy Beshear.

“When you’ve got kids at that age, they dominate every holiday, and it is well worth it,” said Beshear, father of two children, ages five and six.  He described the Beshear family as “surprisingly normal” and “down-to-earth.”

After practicing law for 12 years, Beshear decided to run for attorney general, a job previously held by his father, former Gov. Steve Beshear.

Beshear won the attorney general seat in the November 2015 election by defeating Republican State Sen. Whitney Westerfield.  He was one of only two Democrats victorious in the election, along with Kentucky Secretary of State Alison Lundergan Grimes, an unusual occurrence in a state government historically dominated by Democrats.

Beshear said his parents instilled values in him from a young age, including faith, family and hard work.  He said he carries these values with him whenever he goes to his office as the state’s top law enforcer.

“If you make your decisions based on … those values, then you typically make the right decisions,” Beshear said.

The newly elected Beshear said his children are the influence of everything he does as attorney general, including his current campaign against child sexual abuse in Kentucky alongside first lady Glenna Bevin.

Beshear said combating sexual abuse was one of his top priorities as attorney general, and he described the issue as an “epidemic” in Kentucky.  Despite being more prevalent in Kentucky than in most states, he said, child sexual abuse is not as frequently discussed as other social problems because people are uncomfortable talking about it.

“It’s so horrific that they have difficulty thinking it could happen in their family, and that oftentimes it happens within families,” Beshear said.  “It’s pretty much the most horrendous crime anyone can imagine, and its ramifications are very long-lasting.”

Despite the harsh realities of Kentucky culture that Beshear faces while performing his duty, from child sexual abuse and heroin deaths to scams on senior citizens, his family serves as a constant reminder of what he’s fighting to protect.

“It should be that you have something burning within you, a reason or a purpose, that will make you jump out of bed every single day and work as hard as you can,” Beshear said. “If you’re able to save a significant number of children from abuse, that’s something to put on your tombstone.”