What to know about UK football midway through spring practice 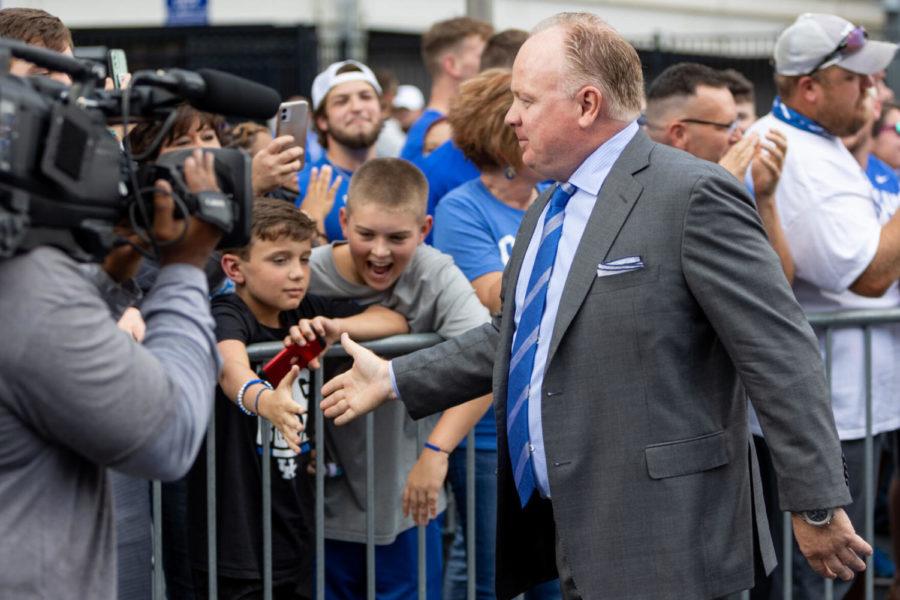 Kentucky is a football school, anyways…right?

For fans who are still reeling from the historic loss to Saint Peter’s, not to worry. Mark Stoops is back for his 10th season at the helm of UK football, and the Wildcats’ spring game is right around the corner.

The Cats are halfway through spring practice, and fans are beginning to get a glimpse as to what the makeup of the 2022 roster is going to look like.

“The guys have a really good attitude, working really hard, we have the nucleus to have a very good football team,” Stoops said.

With several players coming in and out of the transfer portal, UK’s roster will have a vastly different look than it did in 2021, not to mention the loss of the seven Cats who are headed for the NFL.

Stoops didn’t go heavy in the portal, but the main pieces he secured will make immediate impacts in blue and white.

Out goes one Robinson, in comes another. Tayvion Robinson enters the fray at wide receiver, coming from Virginia Tech. He caught 44 passes for the Hokies last season, totaling 559 yards and five touchdowns. It’ll be a challenge to replace the output that Wan’Dale achieved for the Cats last season, but the junior will be asked to step into that role.

Joining Robinson in the wideout room is Alabama transfer Javon Baker. A former four-star recruit, Baker never broke through the log jam of talent that carousels through Tuscaloosa, leading him to Lexington. He caught seven passes for 101 yards and a touchdown for the Crimson Tide last season and will fight for a starting spot in the spring and fall.

The departures of Rosenthal, Kinnard and Fortner point towards numerous holes in the offensive line. Tashawn Manning will provide one easy solution to incoming O-line coach Zach Yenser. Manning made the in-conference jump from Auburn to Kentucky after being a part of the Tigers’ line rotation for two seasons. The 6-foot-4, 335-pound guard will add needed size to an offensive line with more questions than answers.

Darrion Henry-Young highlights the additions on the defensive end. He played just four games across two seasons for Ohio State but brings depth as a defensive lineman. The Cincinnati native may not make an immediate impact, but will be a factor for defensive coordinator Brad White heading into the fall.

The portal giveth, the portal taketh.

Kentucky’s secondary has consistently been one of its weaker positions, and the loss of cornerback Cedrick Dort adds to that. The former starter left Lexington to use his extra year of eligibility, heading to Madison to play for Wisconsin. Over four seasons at Kentucky, Dort appeared in 44 games, making 25 starts.

Linebacker Marquez Bembry played in all 12 regular season games for UK last season, totaling just nine tackles. He made the move to UConn in search of more playing time as a senior.

Isaiah Epps is the biggest loss on the offensive side of the ball, as the wide receiver began the year as one of three starting wideouts. Catching 11 passes last season, the Oklahoma native opted to return closer to home and transferred to Tulsa.

A total of 18 players joined or left Kentucky via the portal, meaning quite the shake-up for a coaching staff that also welcomes in multiple new faces.

Liam Coen’s time in Lexington was brief, as the offensive coordinator left after just one season to return to the Los Angeles Rams for the same position. Stoops wasted little time finding a replacement, as he went back to the NFL, selecting San Francisco 49ers QB coach Rich Scangarello to take over.

Yenser also comes to UK via the 49ers, while Stoops stayed in the family to find an inside linebackers coach, appointing his brother Mike to the position.

Once past the significant amount of turnover, some familiar faces can be found, anchoring the skill positions for the Cats.

Everyone’s favorite fruit-eating quarterback Will Levis is back for one more run in blue and white. After notching 33 total touchdowns last season, Levis is poised to take the next step in his game, as he looks to elevate himself and Kentucky to a level higher than the Citrus Bowl.

In the backfield, Chris Rodriguez returns after rushing for 2,163 yards and 21 touchdowns over the last two seasons. He’ll again be flanked by Kavosiey Smoke and JuTahn McClain at tailback.

The Big Blue Wall will be anchored by Eli Cox and Kenneth Horsey, both of whom will remain key interior pieces for protecting the run game and Levis. DeAndre Square and Jacquez Jones headline the linebacker core, both of whom made the decision to return for one more season as graduate students.

In the tight end position, UK runs deep as Brendan Bates and Izayah Cummings return, while Keaton Upshaw will take over the starting role, having missed last season due to injury.

Kentucky still has some work to do, as just 85 players are currently on scholarship. Stoops and his staff will look to remain active in the portal for as long as possible, though most substantial options have already been gobbled up by opposing schools.

With kickoff against Miami Ohio to begin the season over 150 days away, there’s still plenty of time for the roster to shake out.

The Wildcat offense has the ability to overshadow the defense for the first time in the Stoops era. Scangarello runs a similar playstyle to Coen, providing a smooth transition for the players and the playbook.

There are plenty of question marks throughout the depth chart, but once spring ball comes to an end, Big Blue Nation will have a much greater idea as to what the ceiling will look like. The defending Citrus Bowl champions are no longer a secret in the SEC; Stoops will have to prepare for everyone’s best shot in the 2022 season.