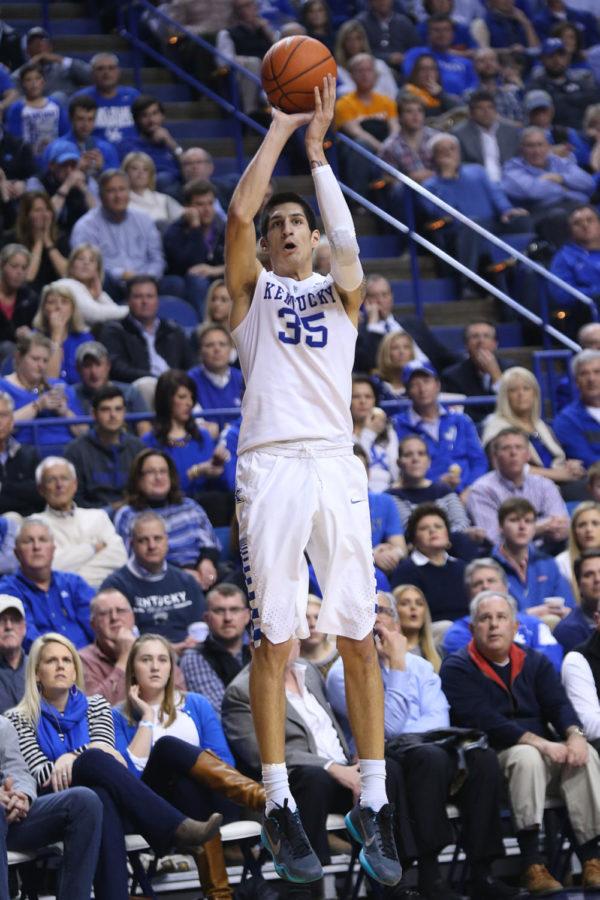 Forward Derek Willis of the Kentucky Wildcats shoots a three during the game against the Tennessee Volunteers at Rupp Arena in Lexington, Ky. on Thursday, February 18, 2016. Photo by Michael Reaves | Staff.

Three points of emphasis for the UK vs. Texas A&M on Saturday:

UK’s Marcus Lee, Isaac Humphries and Skal Labissiere will have to step up for the Cats in Alex Poythress’ absence.

UK head coach John Calipari knows if UK wants to escape College Station with a win, his team must establish a post presence on both sides of the floor.

“They have a great post game,” Calipari said on Thursday. ““They’re so big. If you don’t have a presence that can hold them back a little bit, they can dominate you all around that goal. They’re big and they’re long.”

If his career-high 25 points and seven three-pointers against Tennessee get Texas A&M’s attention, who knows what will? In his last four games, Willis is averaging 14.2 points, 4.7 rebounds and 24 minutes. Needless to say, the Kentucky-native will be a key factor in UK’s success moving forward.

Despite being hampered by injuries after the Tennessee win on Thursday, Calipari confirmed the bumps and bruises shouldn’t effect Willis’ playing time. Expect the junior forward to get his usual 20-plus minutes on Saturday.

Over the course of the last few games, Calipari has preached to the media his team is becoming empowered. Each player is not only accepting his role on the team, but beginning to flourish in it. Freshman guard Isaiah Briscoe is a prime example.

While Lee has been struggling to find his rhythm, Briscoe knew the team needed him to step up on the boards and help carry the team that way. He has averaged 9.2 rebounds in UK’s last five games.

“He knew. He knew when Marcus Lee – he said, ‘Coach, I’ve got this. Don’t even say it. I know what you’re going to say to me.’ And he just went in,” Calipari said. “They’re feeling empowered. The best part of it is I don’t have to battle anybody. They already know what I want them to do.”