Jones and Edelen team up to improve Kentucky politics 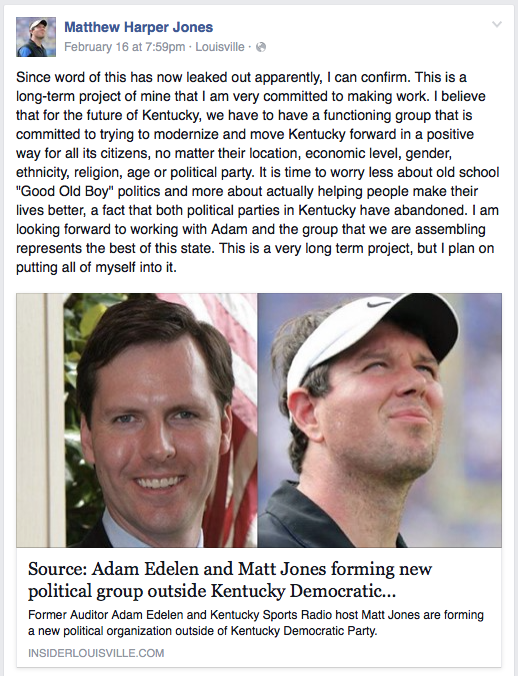 The two-party system offers much to be desired in terms of political diversity, especially in a state as ideologically one-sided as Kentucky.

Many voters, especially young ones, feel dismayed and apathetic toward the political process, but alliances with public figures can help elected officials appeal to wider audiences.

The group will focus on developing new ideas and revitalizing the ailing Democratic Party, which was once the dominant power in Frankfort, but it now faces the reality of a Republican takeover.

Edelen suffered a shocking defeat at the hands of Republican Mike Harmon in the November election, which saw only two victorious Democrats — Attorney General Andy Beshear and Secretary of State Alison Lundergan Grimes.

In a Facebook post, Jones said the group is a “long-term project” that would modernize Kentucky in a positive way.

“It is time to worry less about old school ‘Good Old Boy’ politics and more about actually helping people make their lives better, a fact that both political parties in Kentucky have abandoned,” Jones said in the post.

Edelen’s partnership with Jones will undoubtedly draw droves of young and enthusiastic fans to participate in the political process. Jones has about 148,000 followers on Twitter and at one point considered running against Rep. Andy Barr for Kentucky’s 6th Congressional District.

“I will be reaching out to Matt and Adam in hopes they will engage their new organization to help the hardworking rank-and-file Democrats who are raising money, knocking on doors and doing what they can to keep the House, which should be the top goal of every Democrat in the commonwealth right now,” Overly said in a statement on Feb. 16.

Some might find it demeaning for voters to participate just to appease a sports radio figure, but considering the low voter turnout for young Kentuckians, any method of attracting voters is worth trying at this point.