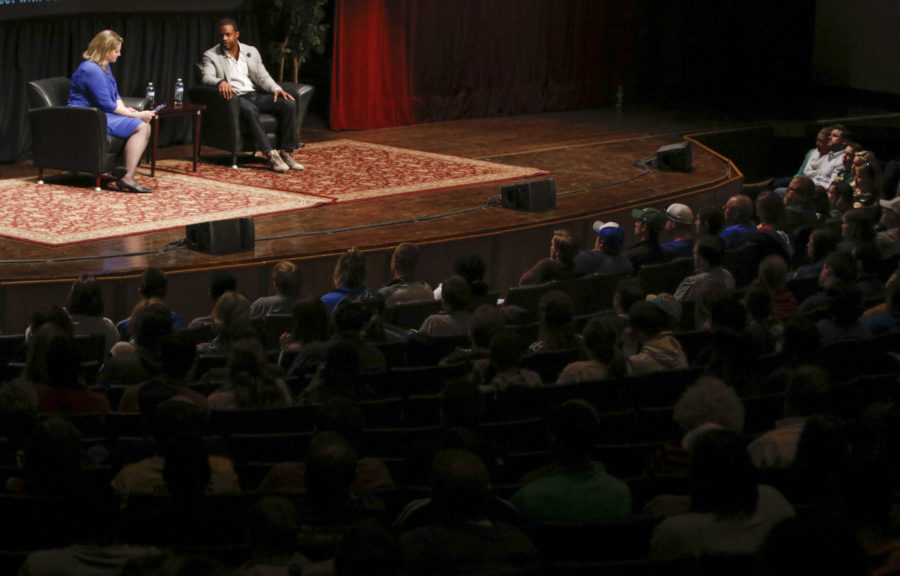 Green Bay Packer wide receiver and UK alumnus Randall Cobb spoke Monday at the Singletary Center for the Arts about his life, his NFL career, his time at the UK and his plans for the future.

Cobb said UK has changed a great deal since his departure to the NFL.

“This campus is a totally different place,” Cobb said.

“UK is like my second home. I feel like Tennessee raised me, but Kentucky made me,” Cobb said.

After his junior year, Cobb was drafted 64th overall in the second round of the 2011 NFL draft by the Packers. He is the first NFL player born in the 1990s to play in league. Cobb has been with the Packers since he began his NFL career. In March of last year he signed a four-year $40 million contract with $17 million guaranteed to stay in Green Bay.

“I didn’t make it up the wall,” Cobb said, laughing with his hands over his face.

Cobb said the transition from college to the pros was difficult, requiring self-discipline and hard work. He explained that while playing football at UK he had his schedule made for him, from class to working out and practicing. In the NFL it is much different.

“You must build your structure yourself,” Cobb said.

He said that since being drafted, he and the Packers’ star quarterback Aaron Rodgers have grown to become best friends. He described Rodgers as a bright person and one of the greatest players to play the sport.

Cobb said he would be happy to continue to play professional football until he is around age 32. When asked if he wanted to remain with the Packers for the rest of his career, Cobb said, “I really hope so. If it was up to me I would retire a Packer.”

Cobb discussed his future plans outside of playing football in the NFL. He said he would like to become an actor after he had a fun time appearing on FX show “The League.” He also threw out ideas of becoming a sports analysis or a football coach.

Cobb is looking forward to graduating from UK this May with a degree in communication and leadership development, calling it “the most important achievement of my life.”

Cobb said only individuals can determine who they will become, and not anyone else.

“It’s about who you are as a person and what you plan on accomplishing,” Cobb said. “Don’t let anyone tell you you can’t.”