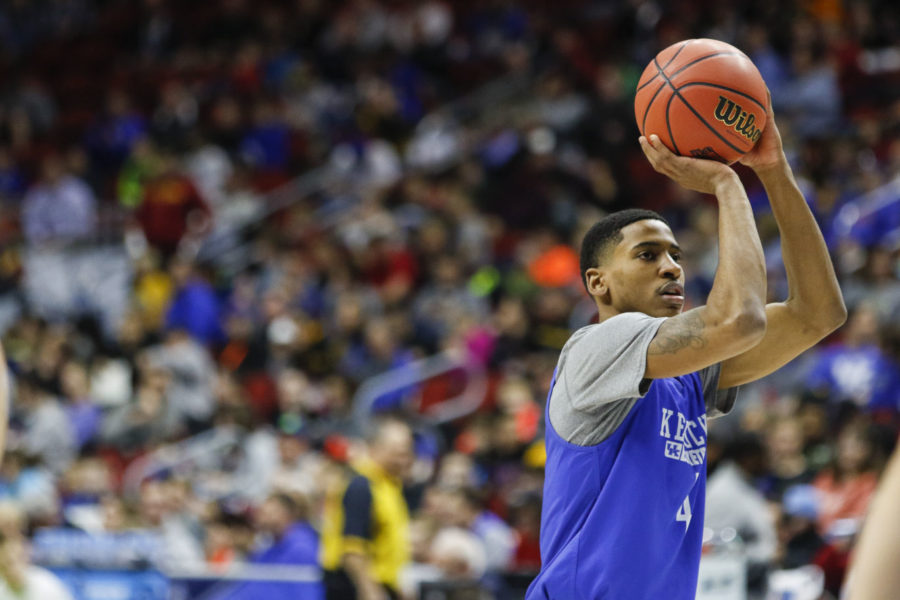 Guard Charles Matthews shoots the ball during open practice before the first round of the NCCA tournament at Well's Fargo Arena on March 16, 2016 in Des Moines, Iowa. Photo by Taylor Pence

UK starts its road to the Final Four tonight as the Cats face off with the Stony Brook Seawolves at 9:40 p.m. ET. The game will be televised on CBS. Here’s a look at the rest of the games being played in the East Region today.

UK fans should be weary of this game, as the winner is who UK will play next if it is able to win against the Seawolves. Indiana is coming off a regular season Big Ten Title and it has one of the top offenses in the country.

The engine for that offense is senior Yogi Ferrell. Ferrell was a Second Team All-American by USA Today and would provide an exciting matchup with Tyler Ulis if the two were to meet in the next round.

The Chattanooga Mocs will provide a test for the Hoosiers as they come in as a very deep team and one that likes to force turnovers. The Mocs have a balanced scoring attack that embodies the “next man up” mantra.

The team showed this mentality as they lost their best player Casey Jones early in the season, but were still able to make an impressive run in the Southern Conference.

The country fell in love with the Cinderella story of Florida Gulf Coast in 2013. After taking up the name “Dunk City” the team was able to defy all expectations and become the first 15 seed to make it to the Sweet Sixteen.

Look for no similar run this year, as the team will having an even steeper mountain to climb when it comes to playing No. 1 North Carolina. Roy Williams’ team is playing some of its best basketball as it came away with the ACC Regular Season and Tournament Titles. Look for senior forward Brice Johnson to exert himself by attacking the glass or the rim on offense.

This matchup should be one of the closer ones in the East in the First Round. USC was able to put together a solid resume with wins over Arizona and Wichita State, but the Trojans have struggled winning away from home on the season. Nine of the Trojans’ 12 losses have come on the road or at neutral sites.

Two things are important in March: guard play and star power — and Providence has both in senior Kris Dunn. The point guard has had  somewhat of a disappointing year after coming in as the favorite for Player of the Year, but he still has shown the ability to carry the Friars with averages of 16 points, 5.5 rebounds and 6.4 assists per game.