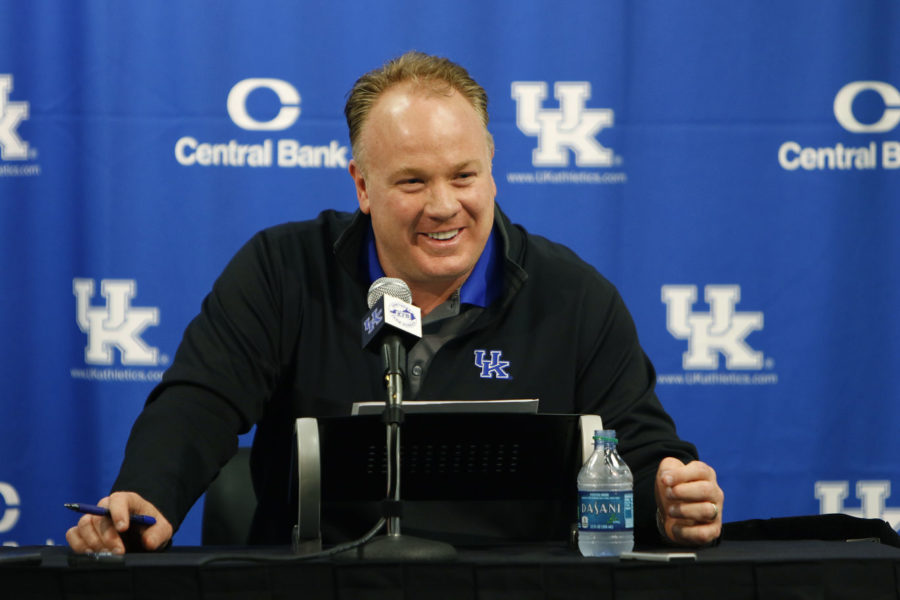 On Easter, the Cats received a commitment from one of the top receiver prospects in the nation, JaVonte Richardson. Richardson is listed as a four-star prospect and the 84th best recruit in the nation according to Rivals, carrying offers from Michigan, Purdue, and Illinois, with high interest from Ohio State and Michigan State.

UK recruiting coordinator and tight ends coach Vince Marrow led Richardson’s recruitment, to no surprise, as Richardson is listed as the second best player in the state of Ohio, and Marrow is known for raking in the best talent the buckeye state has to offer.

With the depth at receiver piling up, Richardson just adds to the crop of options for future quarterbacks to throw to. At 6’4”, 205 pounds, Richardson is known to be a physical freak of nature, and should develop into a monster in UK’s strength and conditioning program.

Richardson’s commitment moved the Cats into the top 10 of the Rivals and 247sports team recruiting rankings for 2017, which consists of five four-star recruits, and three three-star recruits by at least one service.

Mac Jones, a quarterback out of Jacksonville, Florida, committed to the Cats as a three-star prospect with few offers back in July, but after a dominant junior season and impressive showings in various camps, Rivals bumped his rating up to four stars and the 15th best pro-style quarterback in the nation.

Defensive end James Hudson committed to the Cats on July 28 over some of the top schools in the nation such as Michigan State, West Virginia and Tennessee. Hudson, the 211th best prospect in the nation according to Rivals, is a physically overwhelming edge rusher on the defensive line, standing at 6’5”, 271 pounds.

Russ Yeast, son of UK great Craig Yeast, committed to the Cats out of Greenwood, Indiana, with offers from Louisville, Cincinnati, and Purdue, among others. Like his father, Russ Yeast brings to the table a dynamic skillset of versatility and speed, but his high school coaches rave about his intelligence and football IQ as what separates him from other receivers in the class.

Running back Michael Warren committed to the Cats in July as a four-star prospect according to 247sports and ESPN, and a high three-star according to Rivals. Warren combines both strength and speed in the backfield, and will be a tremendous asset to UK in several years.

Running back Bryant Koback committed to UK out of Ohio as a consensus three-star prospect with offers from Northwestern, Indiana, and Syracuse. With several fantastic assets in the backfield for the Cats, Koback will likely need a couple years before he can make an impact.

Defensive tackle Quinton Bohanna pledged his commitment over offers from Cincinnati, Louisville, and Memphis. A three-star out of Cordova, Tennessee, Bohanna has great size at 6’4”, 280 pounds, and will likely get meaningful snaps in a couple years.

Linebacker Jamin Davis is a two-star prospect currently flying under the radar on the recruiting trail, with his only other offers coming from Tulane, Southern Miss, and Georgia State. With great speed, field vision, and a great frame to put on weight, interest in Davis will likely heat up during camps and his senior season next year, so it will likely be a battle for Stoops and staff up until signing day to earn his signature.

Dual-threat QB Walker Wood committed to the Cats out of UK’s backyard in Lexington, Kentucky. Wood is another under-the-radar prospect being unranked by several recruiting sites, but possesses offers from Cincinnati and Louisville, and has the ability to rush out of the pocket with great agility, along with great vision to find open receivers.

Offensive lineman Austin Dotson is listed as the lowest rated recruit committed to UK, rated as a low as a two-star by some services, but the staff still sees him as a good fit for the future at UK. At 6’6”, 295 pounds, Dotson has the frame to put on muscle and provide quality depth in the future for the offensive line.

Though UK has eight pledges for the class, that number will likely be going up here in the next few weeks and into the summer. Three-star edge rusher Alex King and four-star athlete Tyrell Ajian seem to be next in line to commit, as both recently visited Lexington and have high interest in the Cats.

Just eight commitments in, the 2017 football recruiting class is lining up to be yet another impressive one in the Mark Stoops era, addressing positions of need and adding some of the top talent in the nation. With several four-star prospects, and even a few five-star recruits having high interest in the Cats, the road to the National Signing Day 2017 should be a fun one.