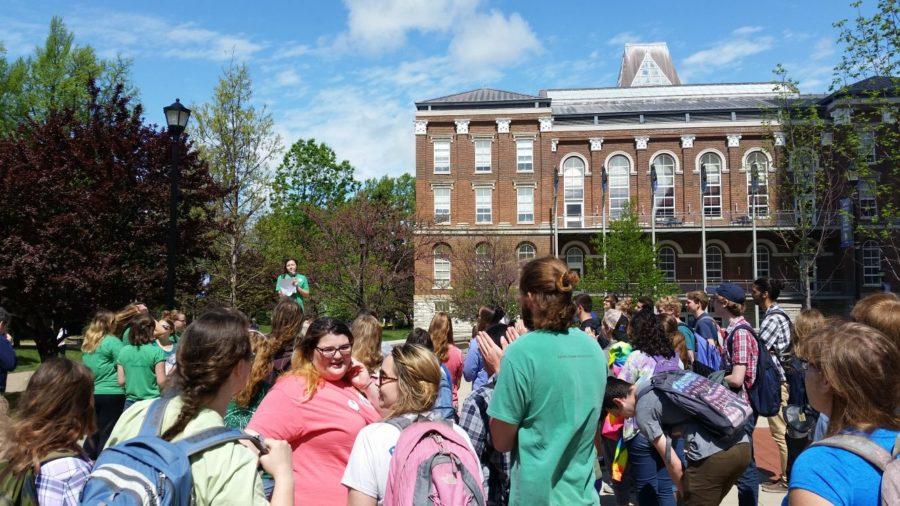 Caroline Engle speaks at the Greenthumb rally in front of the Main Building on Friday.

Dr. Eli Capilouto, it’s time to listen to your students.

Students have been asking UK to sign a climate action plan for years, but to no avail. The university formed a Climate Action Plan Committee in the 2012-13 school year which only met two times before dissolving.

UK’s environmental group, Greenthumb, did not back down. They pushed to meet with administrators in February, who once again rejected a climate action plan with boilerplate remarks about climate initiatives.

The Student Government Association then passed a resolution in support of a climate action plan. The resolution includes, “Whereas: There is a compelling interest among the student body to see the issue addressed by student body leaders, faculty, staff, and administration.”

On Friday, over a hundred students rallied outside the administration building in support of a climate action plan. The rally showed that students are organized, committed and outspoken for the cause.

Alan Fryar, associate professor of earth and environmental sciences, said he worries about climate change as both a geologist and parent. The University of Louisville, Northern Kentucky University, Eastern Kentucky University, Centre College, and Berea College have all signed the Second Nature Climate Commitment, which entails carbon neutrality by 2050.

It’s disappointing that it takes so many outcries from student groups in order to push the university toward climate action.

At this point, to be unsustainable is to be either ignorant or malicious. Anything short of carbon neutrality is harmful, and UK only gets away with it because it is commonplace in our economy.

This is a university, not a corporation motivated by money. The campus should be the first to respond to research which shows the harm of unsustainability.

What do our students learn when the institution charged with educating them commits harmful acts? UK is taking advantage of future generations by upholding their temporary and destructive actions, and its appeal to economic necessity is weak.

“We have a moral obligation to respond to climate change,” said Cameron Baller, a Greenthumb member, at the rally. “We all have a responsibility to do something.”

A strong university is sustainable. Every passing day without serious effort toward sustainability is another day that UK fails to shine as a beacon of hope for the future of Kentucky.

Patrick Brennan is the assistant opinions editor of the Kentucky Kernel.