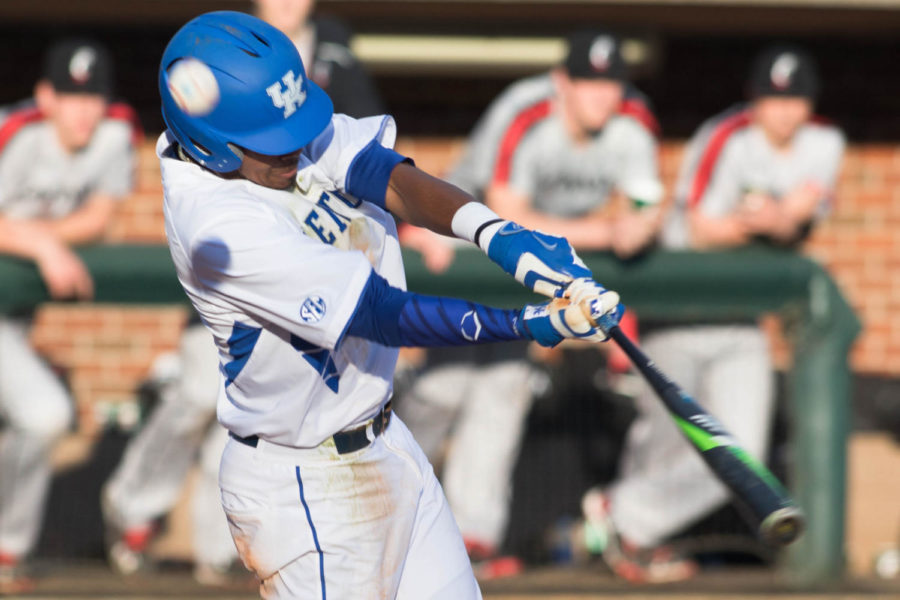 Junior infielder Javon Shelby (5) hits the ball during the game against the Cincinnati Bearcats on Tuesday, March 8, 2016 in Lexington, Ky. Kentucky won the game 8-4. Photo by Hunter Mitchell | Staff

The game was cut short by rain after two delays earlier in the game had already impacted the length of the contest.

The Cats jumped ahead early after Evan White led off with a double and came in to score on a Gunnar McNeill RBI ground out, and after one, it was 1-0.

JaVon Shelby then led off the second inning looking to end his hitless streak that dates back to April. Shelby took a 1-2 pitch over the left field wall for a solo home run, breaking his hitless streak and giving the Cats a 2-0 lead. After loading the bases with one out in the inning, UK was able to extend its lead to 4-0.

The Flyers would go on to score the next three runs and make it interesting, but the Cats added a much needed insurance run in the eighth just before the game was called, cementing the 4-3 victory.

Zack Strecker picked up his third win of the year on the mound for UK and Sean Hjelle notched his seventh save.

Shelby, along with the rest of the Cats will be looking to continue to get back on track Wednesday when UK faces off against Miami of Ohio (20-19) at 6:30 p.m. at Cliff Hagan Stadium.