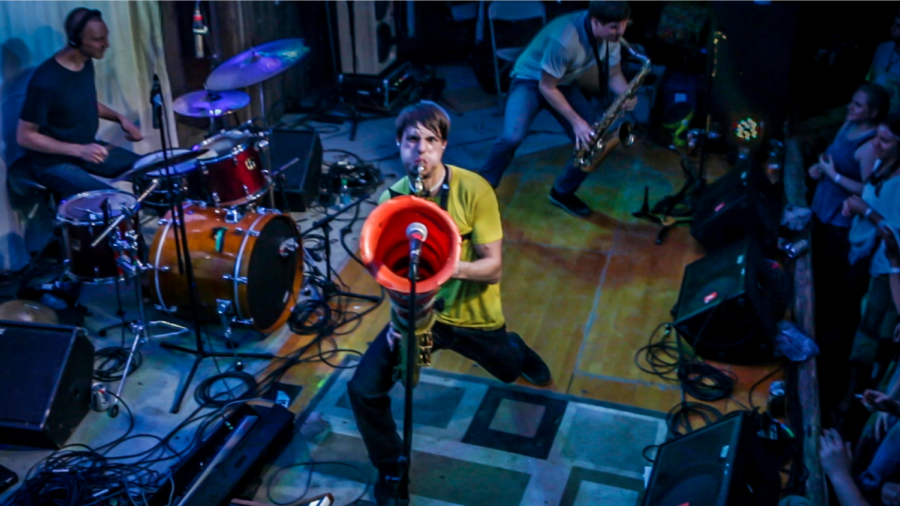 One of Moon Hooch's saxophonists Wenzl McGowen performs on stage with his bandmates at the 2015 Moonshiner's Ball. To modify their sounds, both McGowen and Mike Wilbur add items like traffic cones and PVC pipes.

For the second consecutive year, the three members of Moon Hooch will make their way from the New York City down to Berea, Kentucky, for the third annual Moonshiner’s Ball. The trio, which transcends musical boundaries with it’s unique blend of jazz, electronic dance music, hip-hop and pop, is also readying for their third album “Red Sky” to be released on June 10.

Moon Hooch got their start busking at subway stations and nooks and crannies around New York City, and accumulated a considerable fan base that helped jump-start their careers. According to saxophonist Mike Wilbur, the subways and business of NYC still have a strong influence on the band to this day.

“To me New York is a very noisy, chaotic and crazy place,” Wilbur said. “In my first year at The New School (for Jazz and Contemporary Music) I started really getting into John Cage and listening to sounds, and hearing sound as sort of this big noise orchestra that’s chaotic and seemingly improvised. Listening to that and hearing all these industrial sounds like feet screeching through a hall, people screaming at each other or taxis speaking all in different tones creating these crazy random harmonies. (It has) really influenced us.”

To emulate these sounds, Wilbur says they use anything from PVC pipes to traffic cones attached to their instruments to distort the sound. Wilbur’s saxophone perfectly suits these modifications.

“The saxophone is good at that,” Wilbur said. “The saxophone is just an intense sounding instrument. You can play it buttery, but it’s still intense. It’s not a clarinet. A clarinet is like cuddling a pillow, whereas a saxophone is like hugging a metallic cloud.”

According to Wilbur, instruments aren’t the barrier to Moon Hooch that they were early on. The group’s confidence is soaring, and it’s showing in their music, which is booming with experimentation as well as some of the same elements that got Moon Hooch to where they are now, including the dueling saxophones of Wilbur and Wenzl McGowen. “Red Sky” is proof of how far the band has come while still staying true to their roots.

With a new album in hand and another year of experience under their belts, Moon Hooch is sure to stir up a dance party with their jazzy EDM when they take the stage at the Moonshiner’s Ball at 11:30 p.m. on Saturday, May 21, on the festival’s main stage, sponsored by West Sixth Brewing. Other Saturday acts at the ball include Debraun Thomas Trio, Restless Leg String Band, Darlingside, Johnny Conqueroo and festival hosts Blind Corn Liquor Pickers.

“Moonshiner’s Ball was a blast last year,” Wilbur said. “These girls gave us some moonshine; some really good strawberry moonshine. It was delicious.”

The full band and activities lineup for the Moonshiner’s Ball, including yoga, a kids tent, poetry, food trucks and more, along with single day and weekend passes, can be found at themoonshinersball.com.

“We feel like as a society there’s not enough support for people’s passions,” Wilbur said. “We’re put into school systems and institutions that are very curricular and bureaucratic rather than individual and group-based. I feel like everybody should really just focus on their passions and what they love doing, because we only have one shot in this life. We all have the right to spend it doing something we love, and everybody has the power to do it too, so I just encourage everybody to follow their passions.”