Cats back in win column, take down Murray State 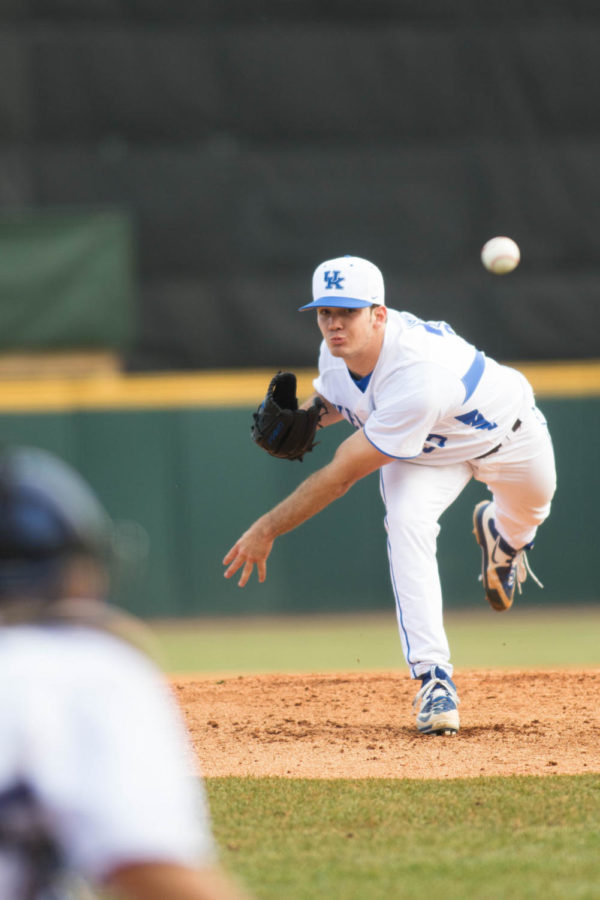 Sophomore pitcher Zach Logue (39) pitches the ball during the game against the Cincinnati Bearcats on Tuesday, March 8, 2016 in Lexington, Ky. Kentucky won the game 8-4. Photo by Hunter Mitchell | Staff

UK baseball got back on track Tuesday, picking up its first victory in a week with a 4-1 result over Murray State in eight innings.

The win marks one of big proportion, starting the Cats’ final week of the season off on the right foot in such a high pressure situation.

Starter Zach Logue fired 5.2 innings of shutout ball allowing just five hits while striking out seven in the process. Logue improved to 3-1 on the year and has emerged as a viable fourth starter for UK which could be crucial in the coming weeks with the SEC Tournament and possibly the NCAA Tournament.

Evan White and Zach Reks provided back-to-back home runs in the third inning to give the Cats a 2-0 lead which would be doubled on a pair of RBI doubles by Dorian Hairston and Gunnar McNeill in the sixth.

Up next for UK is its final weekend series as it hosts Mizzou (25-27). The Tigers sit at 8-19 in conference play and sit just outside the bottom two of the conference, who do not make the SEC Tournament.

Game one of the final regular season series of the year between the Cats and Tigers kicks off Thursday at 6:30 p.m. at Cliff Hagan Stadium.