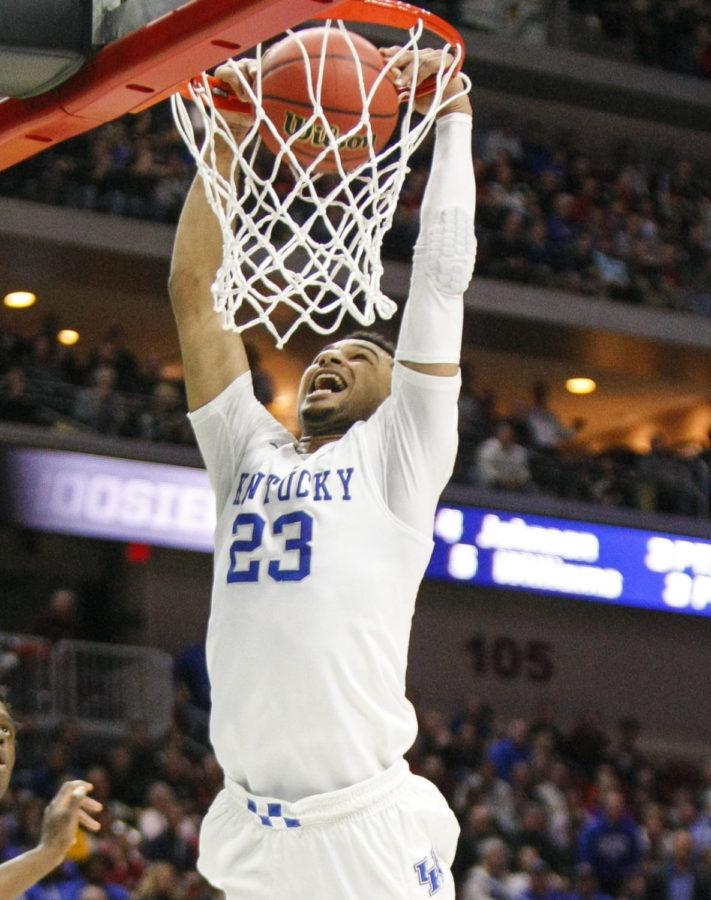 Guard Jamal Murray dunks the ball during the NCAA Tournament second round game against the Indiana Hoosiers at Wells Fargo Arena on Saturday, March 19, 2016 in Des Moines, Iowa. Photo by Taylor Pence | Staff.

Following his first season at UK, John Calipari called the day of the 2010 NBA draft the biggest day in the program’s history. UK had John Wall go No. 1 overall in that draft along with four other players being taken in the first round.

If that was a night that should be cherished by fans, this year’s draft seemed to be one that the fans and players would rather forget.

The 2016 NBA Draft kicked off for UK fans with freshman Jamal Murray being taken with the seventh pick by the Denver Nuggets. Murray had left UK expected to be a top ten pick, and while he accomplished that, he had been projected higher in recent weeks. Calipari himself had came out and made a case for him to be taken with the first pick in the draft.

Murray does fall into a good position in Denver where he’ll play for a young team that will be able to weather any growing pains he has with his transition to the NBA. He also fits nicely with their current point guard, Emmanuel Mudiay, as guy that can play off-ball because of his shooting but also act as a secondary ball-handler as Mudiay had a turnover problem in his rookie season last year.

From there is where the draft got interesting. General managers and draft experts obviously had difference in opinion when it came to this draft class, as the first round was full of surprises. Many foreign players were taken and it left a few guys that had been invited in the green room waiting longer than they expected to.

One of those guys was UK’s Skal Labissiere. The freshman forward looked anxious for most of the night as he failed to hear his name called in the lottery. His waiting was halted, however, but not until the end of the second round was right around the corner.

His name was called eventually with the No. 28 pick from the Phoenix Suns picking via trade for the Sacramento Kings. He heads out west where he will play alongside former Cats DeMarcus Cousins and Willie Cauley-Stein.

His arrival creates a logjam at the big man position as the Kings also took another center earlier in the draft, No. 13 pick Georgios Papagiannis from Greece. But seeing as Labissiere was never a player that was expected to play right away, his long term fit besides Cousins makes sense with his outside shooting.

UK will likely be happy with the events that unfolded in the second round. Early, four picks in to be exact, the Suns drafted UK last draft hopeful Tyler Ulis with the No. 34 overall pick. Ulis reunites with his former running mate Devin Booker while also joining other former UK players Eric Bledsoe, Brandon Knight and Archie Goodwin. However, Alex Poythress went  undrafted during the night.

That closed out the night as far as UK guys go and the consensus was that they all slid further than they were expected to go. Either way, all three now get to live out their dreams of playing in the NBA and fell into great situations for the most part.