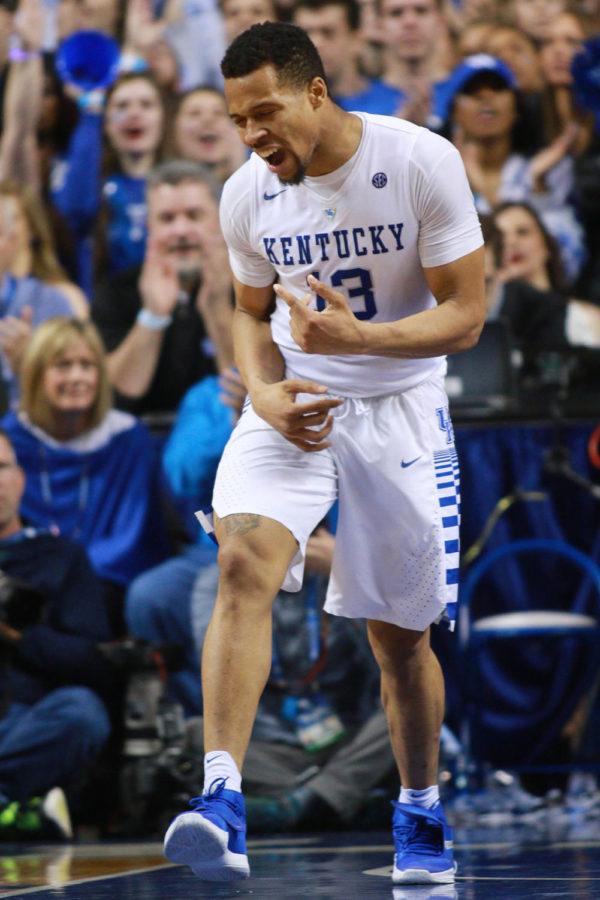 Guard Isaiah Briscoe of the Kentucky Wildcats celebrates a basket during the game against the LSU Tigers at Rupp Arena in Lexington, Ky. on Saturday, March 5, 2016. UK defeated LSU 94-77 to finish the season 23-8. Photo by Michael Reaves | Staff.

On Wednesday, CoachCal.com continued it’s Meet the Wildcats series this week releasing a story on incoming freshman point guard De’Aaron Fox. While discussing what he hopes to bring to the team next season, the topic of leadership came up and that could be a major key for this team moving forward.

Obviously the Cats are taken a big hit with their undeniable leader from last year, Tyler Ulis, leaving for the NBA. Fortunately for UK, they have plenty of guys who are either incoming freshmen or returning players that can step up and that could play into one of John Calipari’s many preaching about servant leadership and having a team full of leaders.

Here’s a look at the guys who look best suited to take up leadership roles on next year’s team.

For any other team in the nation it may seem weird to start a list of leaders for a team with an incoming freshman, but not every team has had the success in this one-done era that UK and Calipari has enjoyed.

Fox is a prime candidate just for the fact that he should and likely will be the guy that has the ball in his hands for most of the time. Fox has all the tools that make up a Calipari-type point guard as he possesses great speed and scoring ability. And while he is replacing one of the best true point guards this program has seen in Ulis, he is no slouch in the play-making department and any drop-off in that area can be lessen by the other guards that Fox will play beside.

In the Meet the Wildcats article, Fox let on that he has always played the leadership roles on his team throughout high school. And it’s also a telling sign that during the All-American circuit this past year, he was always a guy that people wanted to play with because of his desire to get everybody involved.

He will get a chance to show that UK as he tackles the lead guard spot this upcoming season.

It seems that in every season the Cats have enjoyed under Calipari’s reign, the importance of returning players has become indisputable. This year will be no different and the prize of the returning crop is Isaiah Briscoe.

The strengths of the other two members of last year’s backcourt trio in Ulis and Jamal Murray, did well to highlight the player that Briscoe wasn’t. But at times it seems that not enough credit goes to him for what he was.

The point guard out of New Jersey did well in a reduced role for the Cats last season and, setting some bad outside shooting aside, was usually one of the team more efficient players. As a 6’3” guard, he was the team’s best inside finisher and one of the top rebounders. Briscoe also provided a lot of value on the defensive side of the court as he became a lockdown defender throughout the season.

A year of experience can only help Briscoe’s case as leader for this upcoming season, as he will likely be the point of attack for a very aggressive perimeter defense and should thrive doing all the dirty work for this team.

At this time last year, even expecting Derek Willis to be a rotation player would have been a stretch. But after the production he shown to close the last season, it seems like a for sure thing that he will play a big role next year and it’s not crazy to expect the senior to be a leader.

Prior to some off the court mishaps this offseason, it seemed like Willis had really turned a corner as far as his attitude and work ethic. If he can get back on that road, he can be a guy that this team relies on.

On a roster that is full of great athletes, his shooting will be critical for spacing. But if he can make strides to just become an average defender, Calipari can feel comfortable leaving him out there and that could lead to the offense looking dangerous for other teams.

Willis already showed last year with his rebounding numbers that he can improve and be effective when he applies himself. So if he can make the next step on defense, he should give the team someone to turn too for outside scoring.

Coming to UK as a 6’9”, 240 lb athletic specimen, any leadership role Edrice ‘Bam’ Adebayo plays will likely be one fitting the mantra of leading by example. Adebayo will give UK a presence in the paint and on the glass that it didn’t have last year, and his expected production alone is enough to give him the nod in this category.

The highest praises Adebayo has received thus far has all been about his motor and that fits perfectly alongside the rest of the team full of great athletes. He will thrive in the fast-paced style UK will play in and should command a lot of national attention.

The latest news involving Adebayo was when former UK player Michael Kidd-Gilchrist returned to Lexington and while talking to UK media described Adebayo as “a dog.” Coming from a guy that is the textbook servant leader in Calipari’s eyes, that is high praise and enough to fuel any campaign for Adebayo being a leader for next year’s squad.