C. J. Conrad, UK football have no excuses heading into the season 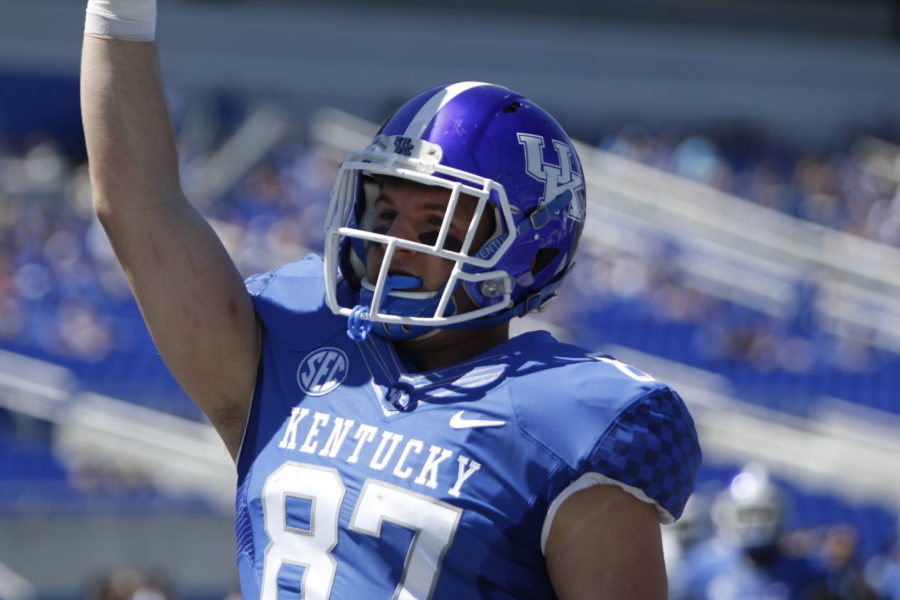 A word that was heard most often throughout UK Football Media Day was “ready.”

Both players and coaches seemed excited to finally get out on the field and start practicing. Sophomore tight end C. J. Conrad joined right into that chorus but also went a step forward in saying that he can’t wait to get on the field where the season’s “business” will be conducted.

“We’ve been talking and working out for so long and now it’s here. I can’t be more excited to get out on the field. The new facility and everything is just awesome,” Conrad said. “I think we are ready to go. The team’s worked out real hard this summer. We have some big strong guys and it’s time to take it out on the field and take care of business.”

Conrad said the team has put in undoubtable work at this point, but so is the investment of this team as a whole.

Between the additions in the coaching staff and the arrival of the new training facility, results, that some may say are overdue, will be expected and Conrad among other realizes this, too.

“Honestly, at the end of the day there’s no more excuses. We’ve got the facility, got the coaches, got the guys. Every one of Stoops’ recruits we’ve talked about this as the reason why we came here,” he said. “To change Kentucky, change the culture of Kentucky football. And we’ve got everything that we’ve wanted and everything that we need. So now it’s time to take care of business in between the white lines.”

Another term that was tossed around a lot was “fresh start” and that’s exactly what this team’s offense has under new offensive coordinator Eddie Gran.

With Drew Barker now under center, there is a new trust among the players and Conrad feels like that has only grown through the spring and heading into the fall.

Fans got a preview during the spring game when Barker found Conrad in the endzone with a 19-yard pass, a pass that Conrad says was there all throughout the spring.

“Just building that trust throwing the ball into the small windows in the redzone,” Conrad said. “I think we are just going to carry that over in the fall camp and into the season.”

Even on a team that returns a lot of starters at the skill positions, Conrad should be one of Barker’s favorite targets once the season has run it’s course. The sophomore earned All-SEC Freshman Team honors after racking up 149 yards and one touchdown on 15 catches. And he should expect to play a bigger role in Gran’s offense.

With a year of SEC football under his belt, Conrad will likely be a key cog on the offense that will hopefully help take this program to new heights.

“I was pretty happy with my season that I had last year, but I couldn’t be more confident in how I feel physically and just mentally,” Conrad said. “I think the game has slowed down a lot for me. I played in every game last year, I played in some big time games. So I think I’m ready to go.”