UK looks to gain some momentum against NMS 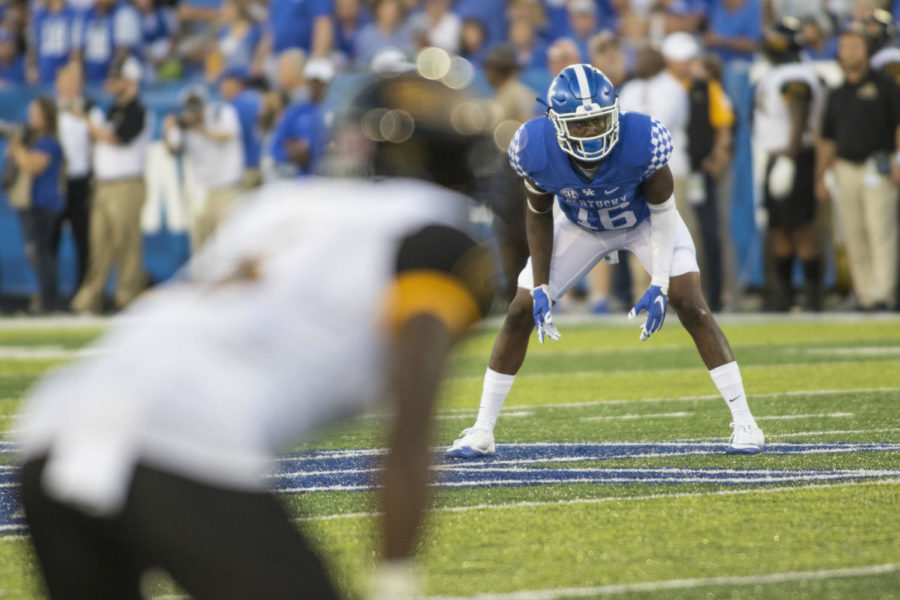 Safety Marcus Walker lines before a punt during the Wildcat's game against the Southern Miss Golden Eagles at Commonwealth Stadium on September 2, 2016 in Lexington, Kentucky.

The past two weeks for UK football have been as bad as any in quite a while, and the team is desperate for any sort of positive momentum.

Although things may be trending downwards, this week’s matchup against 1-1 New Mexico State may have come at the perfect time. With all due respect, the Aggies do not compare to the Cats’ first two opponents and boast a record of 8-30 over the last four years under current head coach and UK alum Doug Martin.

However, the Aggies will bring some momentum into this Saturday’s matchup with the Cats after taking down in-state rival New Mexico last week in a 32-31 thriller.

One thing on the minds of many heading into this week is the offense and how they will respond after struggling mightily over their last six quarters of football. It’s easy to wonder how the group’s confidence is especially after exploding out to 35 points in the first half of week 1, but UK offensive coordinator Eddie Gran feels as if they still carry that same confidence.

“They had confidence in the first week, and we got hit right in the mouth,” Gran said on Tuesday.

It will not only be the offense who will dictate how things play out Saturday, but rather the defense that sits in triple-digits nationally in nearly every category. Although it is easy to focus solely on the defense, the offense’s lack of possession will have to change Saturday in order to give the defense much needed rest.

“I want to see us go down and have a 12 play drive and finish,” Gran said. “Let our defense drink some dang Gatorade and that’s what we need to do.”

The defense will have to deal with the Aggies’ dual-threat quarterback Tyler Rogers, but New Mexico State will most likely be without running back Larry Rose III who set a school record last year with 1,651 yards on the ground. Coach Martin said his star running back was ‘very doubtful’ which will give the Cats defense a bit of an easier task come Saturday.

With the likely absence of Rose, the Cats can focus more on Rogers and try to do everything they can to limit his dual-threat abilities.

One person who has done everything he can so far through the first two weeks of the season is linebacker Jordan Jones who leads the SEC in tackles with 28, which ranks third nationally.

The rest of the defense, especially the highly touted secondary, feel as if they have been disappointing so far to not only their coaches and teammates, but the fans as well.

“The coaches can only do so much, they are coaching, but we need to go out there and play,” cornerback Derrick Baity said Wednesday.

What Baity said harps on the fact that the defense has not performed up to standards along with Gran’s offense. Regardless, both sides of the ball will need to show up come Saturday when the Cats face off against the 1-1 Aggies at 4 p.m.