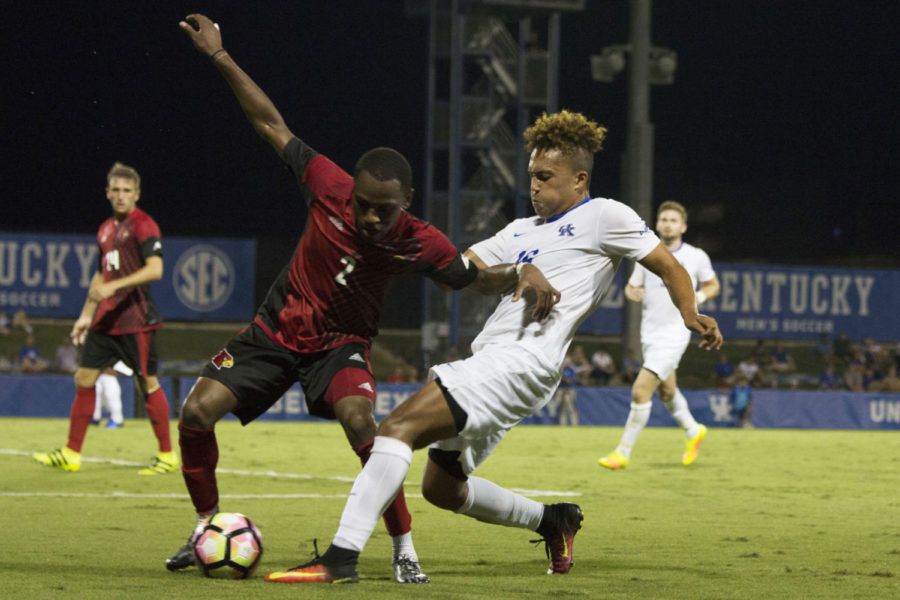 Goal scorer, Noah Hutchins, drives towards the endline during the match against Louisville on Tuesday, September 6, 2016 in Lexington, Ky. Kentucky won the match 1-0. Photo by Carter Gossett | Staff

Taking the field Sunday, UK men’s soccer was tasked with halting a hot New Mexico Lobos team, on a five-game winning streak and ranked No. 21 in the nation. The Cats were feeling good themselves, having just come off a win against a formidable ETSU team on Wednesday. Both teams came in with plenty to lose in this Conference USA matchup.

“Any game with New Mexico is a big one” midfielder Noah Hutchins said. “After the loss to FIU, we definitely wanted to be ready for this one.”

The Cats struck early, with a goal in the fifth minute by Hutchins, kicking the game off with the 1-0 advantage. He scored after an excellent feed from defender Charlie Reymann, and spinning to free himself up, shooting over the keeper’s head, which would prove to be the game-winning goal.

“You always come in wanting to score, but it doesn’t always happen. For us, it happened really quickly,” Hutchins said.

Both teams ended up having several opportunities to score throughout the rest of the first half, including a saved free kick by UK keeper Stuart Ford, and a waved off goal by New Mexico in the 43rd minute of play.

Throughout the first half, the Cats and Lobos played aggressive offense, with 8 total shots on goal between the two teams. However, nobody scored after the early Cats goal, and the halftime score was 1-0.

Throughout the entire second half, the Lobos hounded the UK goal, applying pressure during all 45 minutes and notching 3 more shots on goal, not allowing any by the Cats. However, every time it seemed like New Mexico was willing their way to a goal, the UK defense would halt the possession, sometimes feet away from the goal.

This defensive strength allowed the Cats to hold off the Lobos for the rest of the game, and take the win, 1-0, keeping their home win streak alive.

“We practice a lot on our defensive rotation, our group defense. Our midfielders did a really great job of helping on defense,” Senior defender Jordan Wilson said. “I didn’t think we were going to give up a goal. We have a great keeper behind us, and we were ready.”

The Cats will be back in action on Wednesday at 7 p.m. when they host Lipscomb, looking to climb back into the national picture.