Cats beat down in the Swamp, winless streak to Gators reaches 30 games 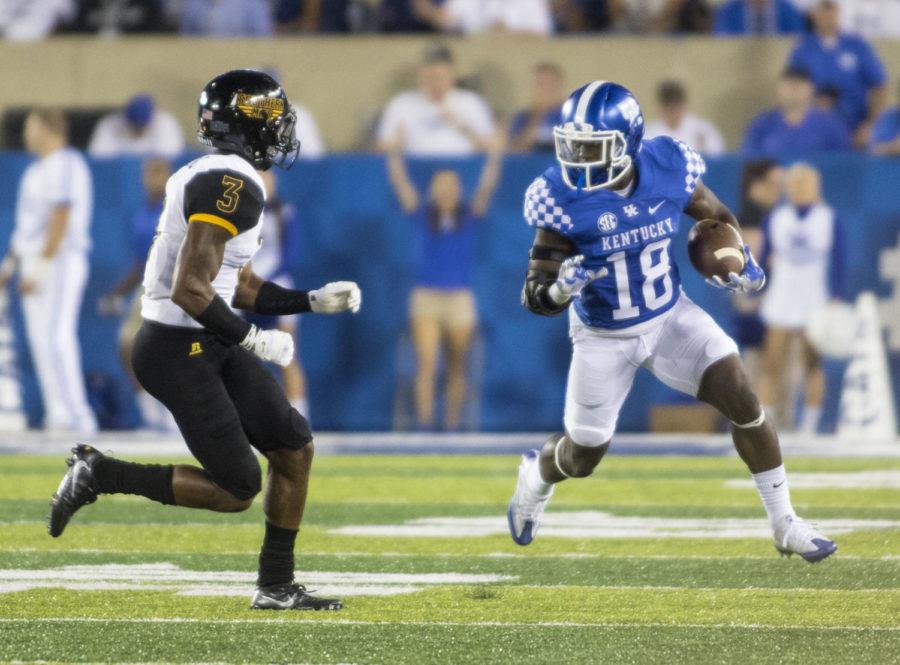 Kentucky running back Stanley Boom Williams rushes with the ball during the Wildcat's game against the Southern Miss Golden Eagles at Commonwealth Stadium on September 2, 2016 in Lexington, Kentucky.

Perhaps CBS’ Verne Lundqvist and Gary Danielson summed up the Cats’ 45-7 loss to Florida perfectly midway through the third quarter as Lundqvist uttered “oh no” and Danielson followed with a sigh of “ugh” as the Cats were blown up in their own offensive backfield.

The loss, extended the Gators historic winning streak over the Cats to 30 straight games, and as was the case in the second half of last week’s loss to Southern Miss, UK could not come up big when it needed to most.

Unfortunately for UK, it picked up right where it left off struggling mightily on the offensive end gaining just 149 yards and as one might imagine, the defense gained no benefit from the lack of offense.

To make matters worse, the Cats were dealt numerous injuries including linebacker Denzil Ware who struggled throughout the game.

A combination of injuries as well as being on the field for a grueling 83 plays in 90 degree heat was not a good thing for a defense that played 95 snaps just a week ago.

The Gators used their 20:17 of possession to beat down an already short-handed Cats defense in the first half.

After what had seemed to be a sack-fumble and recovery by J.D. Harmon who took it to the house for an early Cats lead, the play was overturned and the game remained scoreless. The Gators used their next drive to grab a 7-0 lead.

As the Gators jumped out to that 14-0 lead, it seemed as if UK continued to get pounded as they did just a week ago; the Cats missed a field goal, Barker was picked off again, and just like that it was 24-0 heading into the half.

With UK being completely beaten down as they were a week ago, heading into the half, morale looked very low for the Cats, but unfortunately things would get worse.

Barker would be picked off to start the second half, and from then on, it seemed as if Florida was scoring every time they had the ball. And just like that the Gators 24-0 lead jumped to 38-0, 45-0.

The Cats were finally able to end the Gators’ shutout bid late in the fourth quarter with a Jojo Kemp TD that was set up by a Jeff Badet 45-yard catch and run which was the highlight of the day for UK.

Nonetheless, the score did not matter in what was a tough of a loss as any in the Stoops-era, and it looks as if things are not getting any easier from this point on.