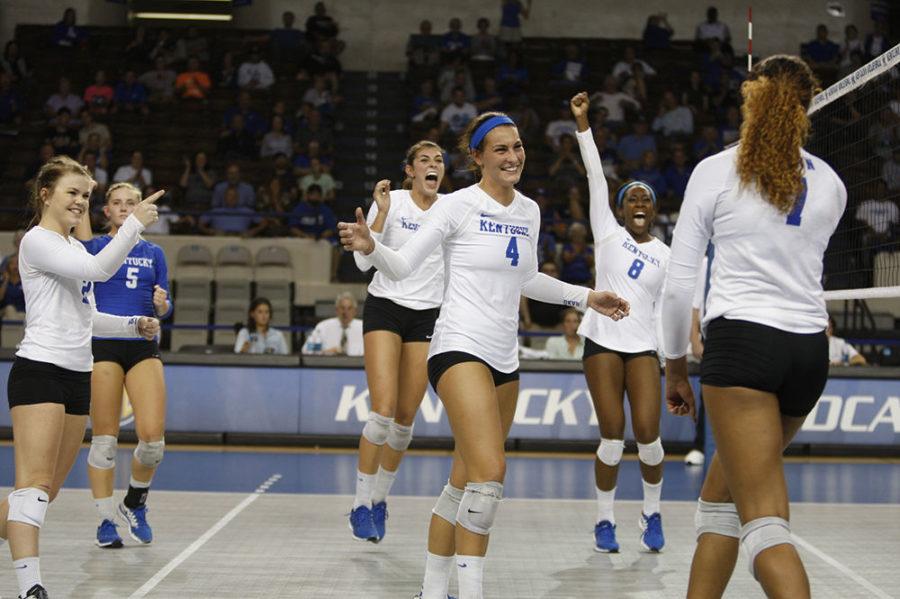 UK volleyball returns to Lexington this weekend to host the Bluegrass Battle in Memorial Coliseum.

The Cats’ annual non-conference tournament will serve as the home opener for the team after participating in the USC Radisson Classic in Los Angeles, California this past weekend.

The season for UK began in West Lafayette, Indiana with the Mortar Board Premier.  The team split its games in the event, first falling to Washington State before bouncing back to beat Wyoming.

During the opening weekend of play, last season’s SEC Libero of the year, Ashley Dusek was honored with the league’s first Defensive Player of the Week this season.

Though the return to Lexington will be nice, starting the weekend off with Marquette will not be an easy feat for the Cats.

The Golden Eagles enter the tournament with a 4-2 record and are led by sophomore Taylor Louis and senior Sara Blaiser. Both will enter the match with UK with two straight double-doubles and will garner a lot of attention from UK.

The rest of the field looks to make for some exciting matches as well for UK.

Virginia enters the tournament 3-6 on the year and could really use a key win to help jumpstart its season. Seniors Haley Kole and Jasmine Burton led UVA in its last game with five kills each and freshman Kiley Banker also added four kills. The Cavaliers have struggled early on in each of their matches. If the Cats can get a lead early it could prove to be beneficial.

St. Louis is entering the tournament with a 1-6 record and although they’ve have mediocre performances in the past few games, the Billiken’s aren’t a team to overlook. outside hitter Danielle Rygelski led the team with several kills and try to be the driving force behind any St. Louis upset.

With standouts Kaz Brown and Anni Thomasson the Cats will have multiple threats on the court this weekend, and that’s not even counting Dusek.

The first few games of a season can be very telling and are a time to adjust what is not working and perfect what is.

Head coach Craig Skinner is motivated to come out on top of the home opener this weekend.

“How are we going to respond against a top 20 team in our home gym, blazing hot and 2,500 fans yelling at us and for us,” Skinner said.

Skinner and the Cats will find out this weekend as the Bluegrass Battle tournament kicks off this Friday night at 7:30 p.m. at Memorial Coliseum.