Cats take 2 of 3 at Bluegrass Battle 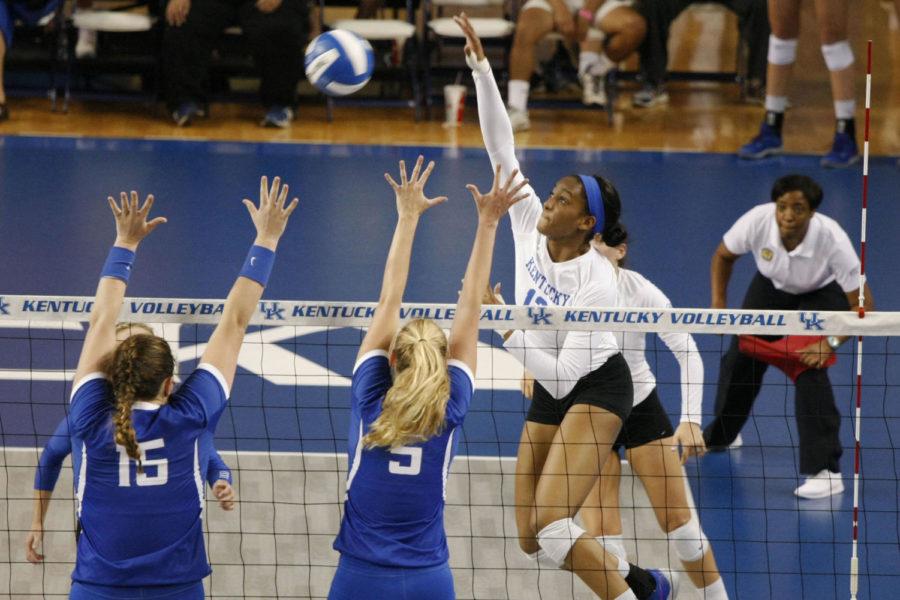 Outside hitter Leah Edmond attacks the ball during the match against Saint Louis on Saturday, September 10, 2016 in Lexington, Ky. Kentucky won the match 3-0. Photo by Hunter Mitchell | Staff

UK Volleyball hosted The Bluegrass Battle this weekend for their third tournament of the year, and it brought some excellent competition to Lexington.

Still early in the year, the Cats played a bit inconsistent during the beginning of the tournament with a loss to Marquette but quickly bounced back with wins over Virginia Saturday morning and then Saint Louis later that evening.

UK struggled in the match against Marquette to find any sort of rhythm and in the process started their weekend in the Bluegrass Battle with a loss.

Offensively the Cats finished with 35 team kills and a .276 attack percentage led by Junior Kaz Brown with hitting percentage (.636) and eight kills in the win. Brown also had a season high of 10 block assists.

In the final match of the weekend against Saint Louis, the score was tight entering the first set. The Cats rallied for a 5-point lead making the score 14-7. Saint Louis rallied back to tie the score 20-20 but couldn’t hold on as the Cats swept up the last five points winning 25-21.

The third and final set of the match ended with a final 25-19. The third set win was partially attributed to the kills by Freshman standout Leah Edmond with 5 kills, and Franklin and Darian Mack added four kills each. Brown also had a great night in attacks with six kills in 10 swings and zero errors.

Edmond also finished the weekend with her second double- double with 11 kills and 10 digs.

Slight adjustments improved the Cats’ attack percentage to .333 for the match. Edmond led in kills, but says she still has changes to make.

“Getting my feet to the ball, that is my big thing so I can take a big swing so I can get a kill, so that’s what I’ve been working on for the past couple weeks,” Edmond said.

With the pair of wins and the loss this weekend, the Cats’ record is now 5-4.

“To be a great team you have to have good blocking, so hopefully we’re on our way,” Skinner said. “One of the things we need to do better on is being able to play good defense and a faster offense, and I mean that’s everyone’s challenge.”

Head Coach Craig Skinner is pleased with the team’s defense but has intent to improve offensively.

“Getting more than 14 kills a set is ideal if you want to compete at the highest level, so rhythm offensively is something we need and if (Dailey) is ready to go every day in practice then it helps us be able to sustain that,” Skinner said.

The Cats take on Louisville in their next match up Thursday evening at 7:00 p.m. at the KFC Yum! Center in Louisville, Kentucky.