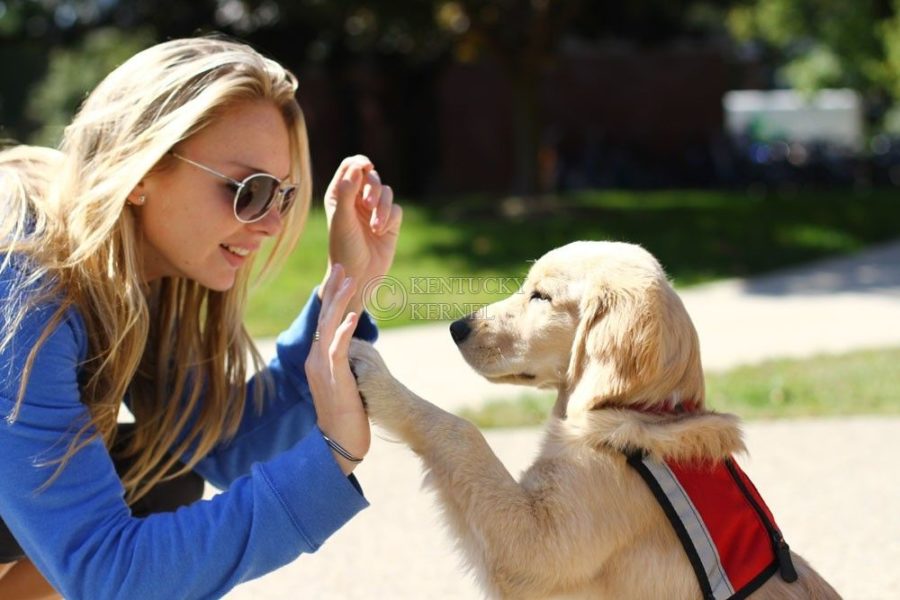 Dogs have been the center of many family homes. They’ve been seen in novels such as Where the Red Fern Grows where a young boy goes through adversities just to have two hounds. Then there is the movie Air Bud, a golden retriever that almost every 90’s kid knows and wishes they had.

It is no wonder that whenever a dog passes by, eyes light up and all heads turn to see that recognizable four-legged friend.

As college students, there are many things that we want to be able to do, from attending football games and other events on campus to feeling accepted and making friends.

It is no secret that many college students can be impulsive and have a hard time making decisions and keeping commitments.

Among these students, there are those who consider owning a dog while still in school, but there is much more that goes into making this decision than just “Oh, it’s fluffy. I want it!”

Owning a dog, or any pet, is taking on the responsibility of being the sole caretaker of another living being that is going to need time, money, effort and endless amounts of attention.

Anna Villarreal, finance and economics junior, believes one has to be “really responsible” in order to adequately care for a dog.

“You have to make sure to have time and patience and money,” said Villarreal.

Villarreal took in Nena, a rescue dog, last spring. Per month she spends roughly $65 for her apartment’s pet fee and on food for Nena. This does not include the initial payment she made out to her apartment complex for having Nena or any unexpected expenses that may arise each month, including vet and groomer fees.

The expenses that come along with owning a dog are substantial, and students considering taking on this responsibility need to carefully consider this when making the decision to become a pet owner.

Morgan Avery, public health and biology sophomore, and her roommate Emily Novak, electrical engineering sophomore, are both animal lovers and were looking forward to getting a dog for their new apartment off of Red Mile Road.

Avery and Novak had decided that they were going to adopt a dog until, after careful thought and consideration, they realized it was not the best time to take on that big of a responsibility.

“It is a good idea if you have time for it,” said Novak, who realized that she would not be able to provide the necessary attention for a dog on top of her work schedule.

Another factor that pushed Avery and Novak into waiting to get a dog was that the adoption center required potential owners to be 21 years or older before they could be eligible to adopt, which is highly reasonable considering the huge responsibility that adopters will be taking on.

Libby Lloyd, a pet technician at the Lexington Fayette Animal Care and Control, believes that “owning a pet is a great thing,” but also elaborates that students “need to understand the responsibility.”

It is not really the question of whether or not college students should own a dog because dogs bring endless amounts of joy, such as in the life of Villarreal who adores her dog Nena. It is more of the fact that students need to know all of the encompassing details of owning a dog.

Students should do their research, and they need to be honest in the amount of time and money they can put into raising a dog, especially in the case of deciding to get a puppy, which comes with its own list of responsibilities.