Southern Miss Preview: Cats try not to overlook the Eagles 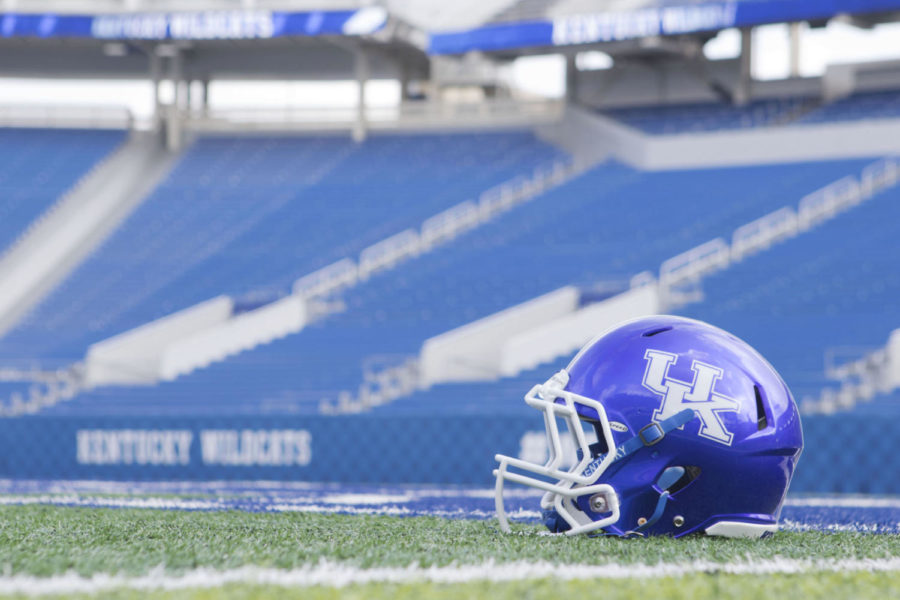 A helmet rests on the field during the University of Kentucky Football media day on Friday, August 5, 2016 in Lexington, Ky. Photo by Hunter Mitchell | Staff

When the Cats run through the tunnel Saturday night at Commonwealth Stadium for their season opener, the team on the sideline opposite them will be no pushover.

With all due-respect for the previous three teams that UK has faced to open the Stoops era, none compare to this Southern Mississippi team that won nine games a year ago.

Led by senior quarterback Nick Mullens, who threw for 4,476 yards last year, the Eagles will pose a challenge to the rather inexperienced Cats defense. With former UK-OC Shannon Dawson running the offense, the Eagles will be prepared.

Although the Cats defense may be inexperienced, something to keep an eye on is the highly-touted secondary going against the experienced Mullens. Nonetheless, it will have to be a cohesive effort on the defensive end.

Related: Culture shift in progress at UK under Stoops

UK defensive coordinator, D.J. Eliot, is entering his fourth year at the helm of the Cats defense. This will easily be the most challenging opener he has had to deal with and perhaps the most interesting going against his former OC.

“We’ve studied them a lot in the offseason and we’re back to studying them again, so we’ve studied them quite a bit. I think our advantage is the same as their advantage,” Eliot said. “I know (Dawson), but he knows me, I don’t think it’s one way or the other. We have watched our own offense last year for some of the scheme and some of the Southern Miss. film from last year for personnel.”

Personnel is something that the Eagles do not lack, led by Mullens who is on the lists of many for preseason awards. The Eagles also return safety D’Nerius Antoine who led the team in tackles a year ago.

Quarterback, Drew Barker, is entering his first full season as the starting quarterback and he knows the challenges that the Eagles pose Saturday but is eager to get going.

Led by Barker, the offense is coming into the season with high expectations, and it will be the first time that the Big Blue Nation will be seeing the new offense under Eddie Gran and Darrin Hinshaw.

“Now it’s time to go play. I’m excited for (Barker). I think we are right where we need to be and I’m excited with where we are at,” Gran said about his group.

One matchup that will be very interesting to watch come Saturday is the experienced UK offensive line against the aggressive pass rush that the Eagles are going to bring to the game.

With the season kicking off Saturday, the Cats will be looking to get off to a fast start like they have done in previous years, but this one may not come as easy as some think, and the coaching staff and players know that.