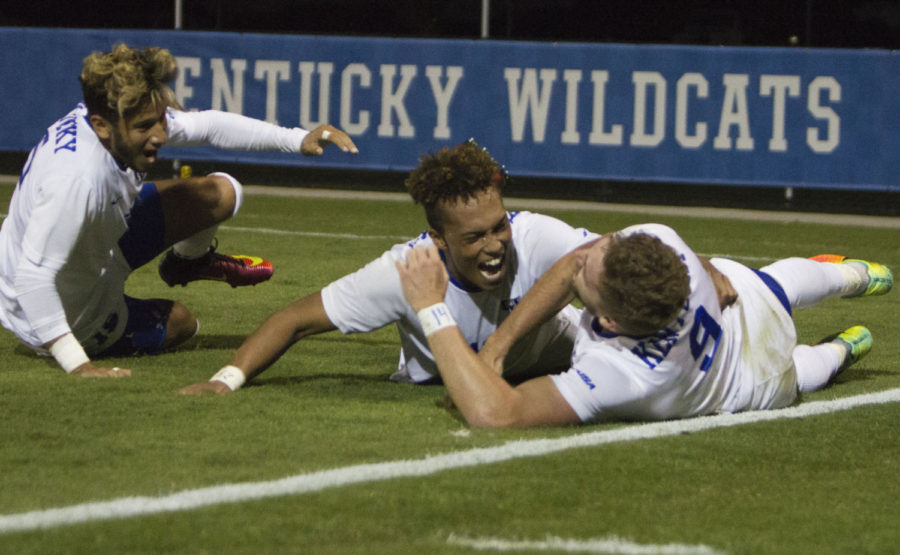 Coming off two tough away losses against Furman and FIU, the UK men’s soccer looked to redeem themselves on the pitch Wednesday night against the East Tennessee State University Pirates. The Cats hoped to claw their way back into the rankings, after being ranked as highly as No. 17 in recent weeks and made a great case for themselves in the 1-0 double overtime win over the Pirates.

Coming in, ETSU was an extremely difficult-looking opponent, fresh off a victory against top-ranked North Carolina. But the Cats were able to get the winner in the 7th minute of the second overtime when forward Andrew McKelvey scored the match’s only goal to close off a great feed from JJ Williams.

In the first half, both teams took even swings at each other, notching several shots a piece. Both teams got physical at times as tempers flared, with ETSU drawing seven fouls in the first 45, and yellow cards being issued to each team. ETSU Midfielder Serge Gomes exchanged frustrated words with several opponents, and there were pushes after plays scattered throughout the first half.

Midfielder Connor Probert found success early being a catalyst for the Cats offense, leading the team with four shots in the game. Probert repeatedly reaching deep ETSU territory, even testing the ETSU goalie with two shots on goal in the first half.

“I felt that I was far more dangerous in the first half than I was in the second, but I try not to worry about it too much,” Probert said. “My job is to get up field and create plays for my teammates, and I feel like I did that.”

In the second half, UK was quick to jump on the attack, surging at the opponent every chance it got. The aggressive attack was noticeable in the 5-0 UK advantage of shots taken in the half. “We knew how good they were, and our main focus was on repressing [ETSU],” McKelvey said.

In the 83rd minute, a penalty kick by the Wildcats almost resulted in a commanding goal to clinch the game, if not for the stellar save by ETSU’s keeper, Jonny Sutherland. After another dangerous shot from the Cats, the game moved into overtime, which contained more of the same offensive pressure from Kentucky.

In double overtime, it appeared the game may end in a tie, when there was only one shot on goal by ETSU. Then a scrappy play by forward McKelvey led to a point-blank goal to cap off the game.

The win keeps the Cats’ home streak alive, and regains their dignity as a national contender. UK will return to action Sunday at 7 p.m. in a Conference USA match against New Mexico with the support of the home crowd at The Bell.