UK Hoops putting the past behind them heading into new season 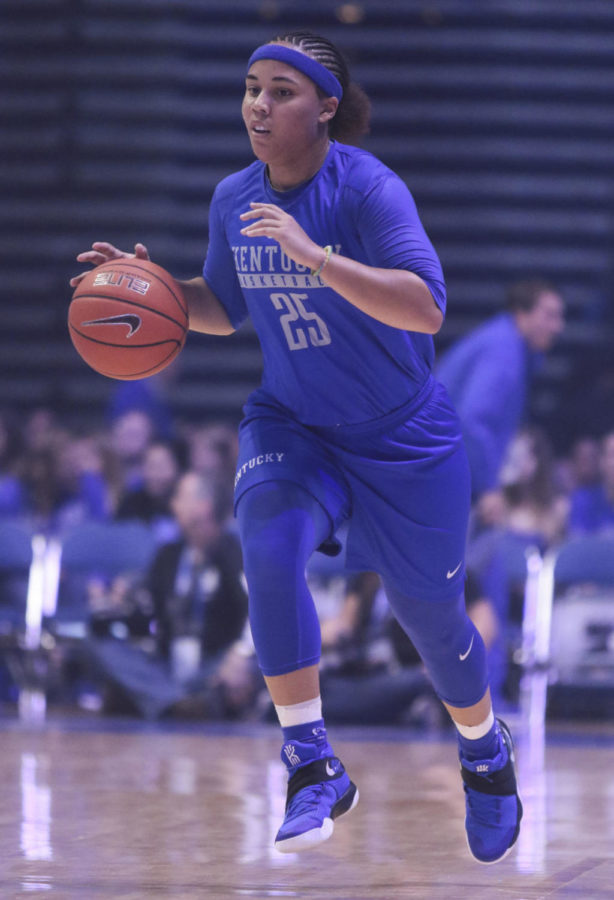 Makayla Epps dribbles the ball down court during Big Blue Madness on Friday, October 14, 2016 at Rupp Arena in Lexington, Ky..

The UK women’s basketball program has lost many players and coaching staff members in the past year, but that is not what the current players think about during practice.

Instead, they focus on working hard and becoming the best players they can be for the team. Head coach Matthew Mitchell has noticed the ladies efforts in practices leading up to the start of the season.

“The players have worked extremely hard to progress to where we are now,” Mitchell said at Media Day Friday. “The work that they’ve put in to prepare has been considerable, its been high quality, its been done with great effort and great attitude.”

The Cats lost four players from last year’s team, two of which were starters. A number of coaching staff members left the team as well in the off-season.

Many people thought it would be a tough for UK to overcome such loss, but coach Mitchell thinks that the challenge is over.

“At this point, its not challenging at all because I think we have great people involved right now,” Mitchell said. “Its been well documented and much discussed, but I just think it’s time now for us to really get excited and get focused on the players who have shown a tremendous commitment.”

Related: Cats gearing up for big showdown with Miss. State

Star player for the Cats Makayla Epps shares her coach’s belief that the challenge is over for this team.

“I think we’re pretty past it,” Epps said. “We lost a couple of people towards the end of the season last year, the people that are with us now, we’ve been practicing really hard, we have a really good group of girls.”

Sophomore guard Taylor Murray never considered leaving UK, even in the middle of the turmoil.

“I stayed because I committed to come here, so I wanted to stay, I enjoy coach Mitchell and the players,” Murray said.

With last season’s departures in the rear view mirror, players are focused now on the upcoming season. The team is looking to rebound from last year’s early tournament exit in the sweet 16.

One way the players are working to improve is giving their best in practice.

“You can honestly say that everybody is giving it 110 [percent],” Epps said. “Whether we be sprinting, cone drills, playing against each other, you know everybody is just giving 110 percent at all times.”

Mitchell has done his best to motivate his players to work hard in practices, and everyone seems to have bought in.

“Coach Mitchell, he preaches on hard work, honestly and discipline, and I think you can see that when people watch us,” sophomore Maci Morris said.

Morris is just one of the many players who has worked hard to improve as a player over the summer. Mitchell believes that Morris’ efforts have elevated her game.

“She [Morris] has improved in all areas, she’s going to be the one where everyone goes ‘wow’,” Mitchell said. “She worked her tail off this summer, I’m really excited to see her play this season.”

After an exhibition game against Union University, the Cats will open up their season on November 11 against the Miami Hurricanes at Memorial Coliseum. Mitchell believes the player’s effort will translate into a good season for his team.