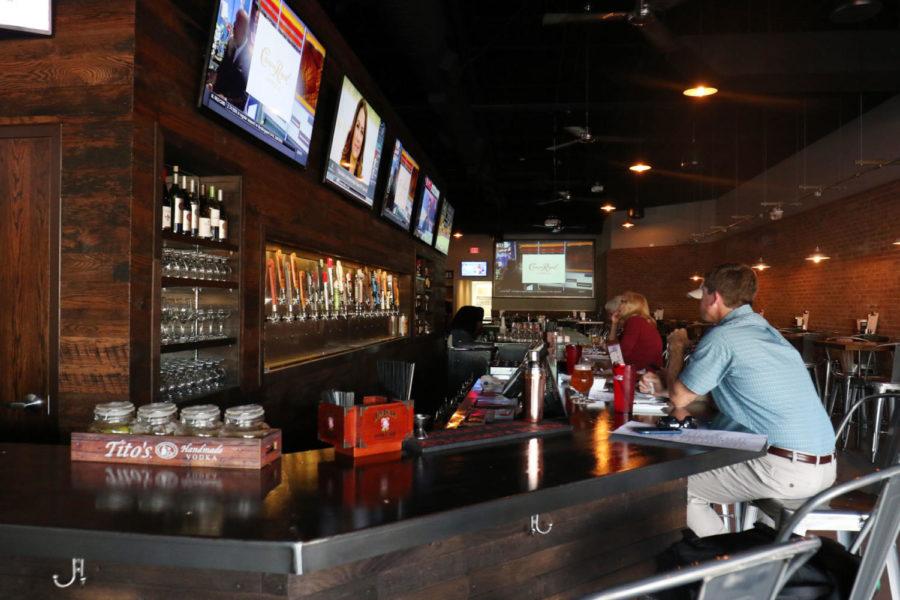 District Sport & Tap is now open at their South Broadway location, which was once Saddle Ridge. It is a one-of-a-kind location that is only open in Lexington.

District Sport & Tap is a sports bar with a full menu that is currently open from 3 p.m. to 12 p.m. on weeknights and until 1 a.m. on weekends. They are currently in transition to opening for lunch that will start at 11 a.m.

There are 30 craft beers offered on tap, 15 of which are local and the other 15 rotate throughout the year. One of the more popular craft beers featured right now is Founder’s Breakfast Stout that is only available from September through December.

Senior Marketing and Management major Alex McGarr noticed the new location while driving by with his friends and decided to try it out.

“The main thing I liked was the atmosphere and the assortment of beer on tap. It’s also a great place to watch a sports game,” McGarr said.

Sporting events are played over loud speakers and played on 16 different big-screen TVs or on the 285-inch projector screens. Live music acts, most of which are local musicians, are also booked on weekends. This weekend’s featured artists are Taylor Hughes on Friday and Indigo Kids on Saturday, both from 9 p.m. to 1 a.m. There is also Keno, corn hole boards, pool tables, and a large outdoor patio.

The menu includes several appetizers along with a variety of salads, burgers, and sandwiches. Some of the more popular food items on the menu are the Reuben Balls and the Mac Attack Burger, which comes with bacon and fried mac n’ cheese along with other usual toppings.

Manager Joshua Snow described the design of the building as an industrial loft look. All of the materials used are reclaimed wood and brick with metal accents. All of the wooden tables are also handmade. Snow also described the food as elevated bar food accompanied by a relaxed atmosphere.

“It’s really laid back, nothing too loud or too crazy. It’s just a calm place to eat, drink, and feel like you’re at home,” Snow said.

District Sport & Tap is open to all ages to come eat, and the kitchen stays open until around 11 p.m. Happy hour happens every Monday through Friday from 3 p.m. to 6 p.m., featuring half-priced appetizers and wine, $3 wells, and $2 bottled beers.