Lineup versatility for UK clear in blowout win over Clarion 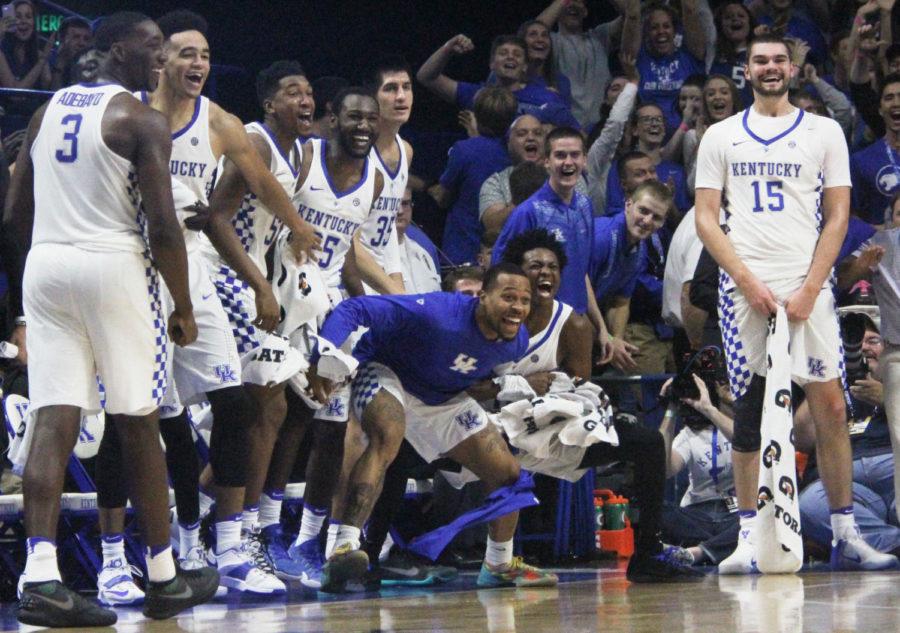 The team celebrates a Brad Calipari 3 pointer during the game against Clarion on Sunday, October 30, 2016 in Lexington, Ky. Photo by Carter Gossett | Staff

UK’s first exhibition played out how many suspected it would, with the Cats defending and running their way to a overwhelming 108-51 victory over head coach John Calipari’s alma mater, the Clarion Golden Eagles.

While it played out like most predicted, it started with confusion as the starting lineup was rolled out without the third piece of UK’s impressive guard trio, Malik Monk.

“I wanted to — look, if I played those three together, the front line rotation was going to be screwed up,” Calipari said on the lineup decision. “So I did what I did.”

Monk shortly was inserted into the game and quickly showed why many expected him to be amongst the starters as he chipped in seven points and four steals in the first half alone, but UK didn’t need him to jump out to a quick start and really flourished no matter who was on the court.

UK played a total of 12 players in the first half alone and by the time the final buzzer sounded, 11 of them had put points on the board.

Calipari even went back on an early promise that one of Isaiah Briscoe and De’Aaron Fox, the other two parts of the guard trio, would always be on the court, as he started the second half with lineup without them.

That mix-match lineup played just fine, but there was a noticeable uptick when UK rolled out the three guards along with Bam Adebayo and Isaac Humphries in a lineup that looked the best of any Sunday night.

In a little under five minutes of court time, the group pushed a 58-29 lead to 73-35, scoring seemingly at will.

Having the distributor in Fox and Briscoe on the court at the same time surely helped, but the pace stayed fast throughout no matter who was playing.

“It was fun. Everybody getting out in transition, catching lobs, just passing the ball and dunking,” freshman Sacha Killeya-Jones said. “We were trying to play fast and athletic, and I think we played really good defense, got a lot of steals and everything.”

Clarion was faced with UK throwing a multitude of lineups at them, making it hard to find any answers. Whether it was three guards, three bigs or some other combination. UK has a deep arsenal of lineups to throw at teams something that points towards the Final Four aspirations that Clarion head coach Marcess Williams see for the Cats.

“In my past, I always kind of look at championship teams as being able to play in different ways. To win a championship, you’ve got to be able to do a little of both,” Williams said. “… I mean, the sky’s the limit for Kentucky basketball right now.”