Cats beat Vandy at their own game 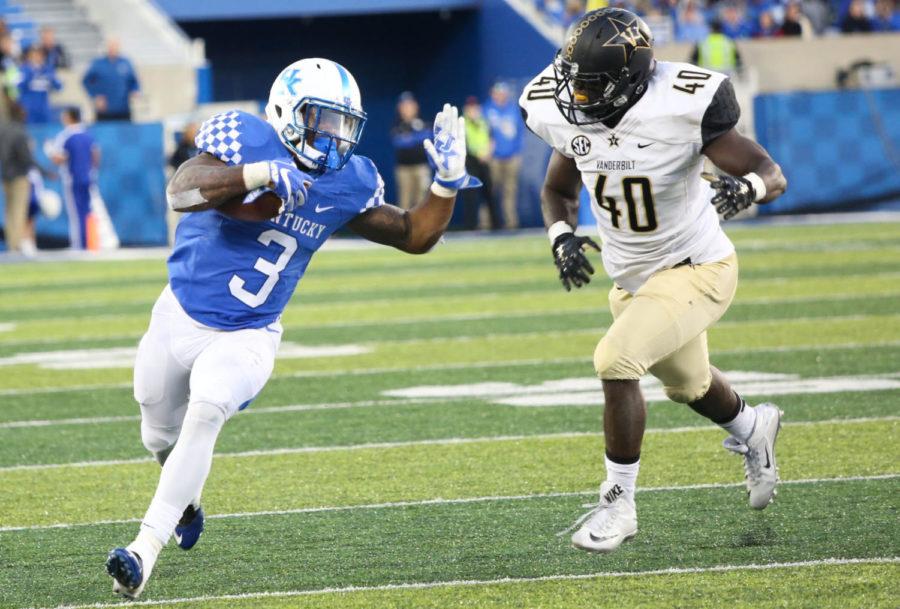 The main concern for Big Blue Nation coming into Saturday’s matchup with Vanderbilt was the fact that the Commodores love to run the ball and control the clock behind the SEC’s leading rusher Ralph Webb. However, it was the Cats who used the run to control the clock en route to a massive 20-13 victory.

Despite just 49 yards through the air, UK ran for 258 yards on 52 carries against a Vandy defense that only gave up 160 yards on average to opposing rushing attacks.

On the very first drive of the game for the Cats, it became very clear that they wanted to run the ball and not allow the ‘Dores to control the clock with their ground game. And on that nine-play, 75-yard drive to open the game with a touchdown, UK ran the ball six out of the nine plays for 61 yards that was capped off with a Jojo Kemp four yard touchdown run.

Something that proved to be extremely effective in the first half for the Cats was their ability to run the ball in numerous different fashions. All three running backs carried the ball in the first half at least six times, and for the first time all year, dual-threat quarterback Stephen Johnson used his legs to his advantage.

Johnson, who rarely pulled the ball on read options in his first two starts, began to utilize his running ability which made things difficult on the Vanderbilt defense.

At the half, Johnson had 42 yards rushing which surpassed his overall total so far this year, to go along with the 42 yards in the first half, he also had a rushing touchdown which gave the Cats a 17-3 lead heading into the half.

Unfortunately, the second half started in a way that UK fans have been all too accustomed to.

After forcing Vandy to punt on the opening drive, the next play resulted in a Stanley ‘Boom’ Williams fumble that was recovered by the ‘Dores and taken back to the house to make it 17-10 early in the second half.

Although UK never trailed in the game Saturday, following a Vanderbilt field goal that made it 17-13, it felt as if the Cats were not going to be able to hang on.

Luckily for the Cats, the running game stayed its course and the team finished behind Kemp, and freshman Benny Snell who had another tough performance; rushing 20 times for 94 well-earned yards.

Perhaps the most important offensive play of the game was when Kemp, out of the wildcat, was nearly brought down for a big loss, but instead turned the corner for a big first down that allowed UK to continue their drive which resulted in three huge points.

“I knew I just had to make a play,” Kemp said. “Our business is finishing, and I knew that our team had to finish tonight, so it was one of those deals where I knew it was risky but I knew I had to get it done.”

With Kemp’s ability to make a play when it was needed, the Cats took a touchdown lead over the Commodores which was crucial especially when Vandy drove down the field in 1:33 and nearly tied the game.

Fortunately, the Cats defense was able to avenge a gut-wrenching loss last year to the Commodores that basically cost UK a bowl berth, but now at 3-3, UK’s hopes of making a bowl are still very much alive heading into the bye week.