Cats roll to 4-0 behind steady play from Bam Adebayo 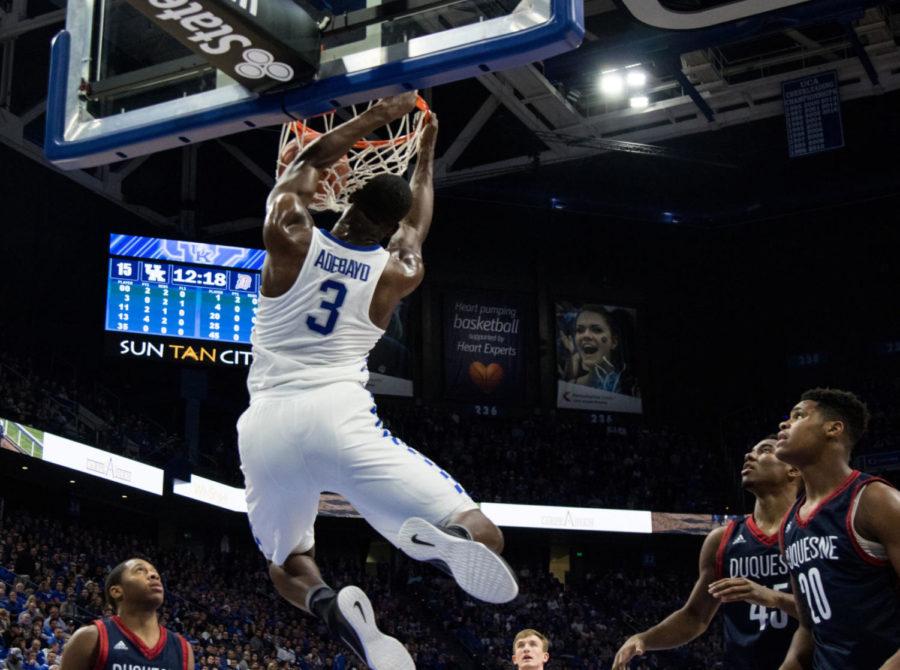 Coming off of its big win over No. 13 Michigan State in the Champions Classic on Tuesday, No. 2 UK showed no sign of a hangover against Duquesne with a 93-59 victory Sunday night.

Sunday night was the most balanced effort that the Cats have had all season with five guys in double figures, and five more guys getting their names on the score-sheet. And while it was an overall balanced attack on both ends of the floor, Bam Adebayo had the best game of his young career in the win.

“I like that we had a post presence,” head coach John Calipari said after the game. “I thought Bam was outstanding, he is getting closer and closer. — He is getting better every day, making his free throws, he is rebounding in traffic, coming up with loose balls. He still has a ways to go, but he is getting better.”

Adebayo got off to a fast start in the first half hitting three of his four shots as well as knocking down two of three from the line to finish the half with eight points and four boards. And despite only finishing with 12 points and eight boards, it was Adebayo’s presence and effort that were felt throughout the game.

That same presence and effort is what Calipari has been raving about with the freshman regardless of his struggles through the first three games. Adebayo showed his relentlessness especially on the defensive end picking up a pair of blocks and a pair of steals.

While Adebayo had his first big performance in a UK uniform Sunday night, it was business as usual for the trio of guards Isaiah Briscoe, De’Aaron Fox and Malik Monk.

Fox led the team in scoring Sunday with 16 points, but Briscoe and Monk were right behind him dropping 13 and 14 points respectively. In all four games this season, the three guards have scored in double figures and with his six assists, Fox led the team for the fourth straight game in that category.

And although it may seem as if Fox had the biggest night of any UK player, the freshman struggled for the first time all year shooting just 5-13 from the field as well as missing his first three free throws of the year.

Despite Fox’s minor struggles, the back-court still managed to make things look easy, and the same can be said for the rest of this young Cats team that turned in another stout effort on the defensive end in route to a comfortable home victory.