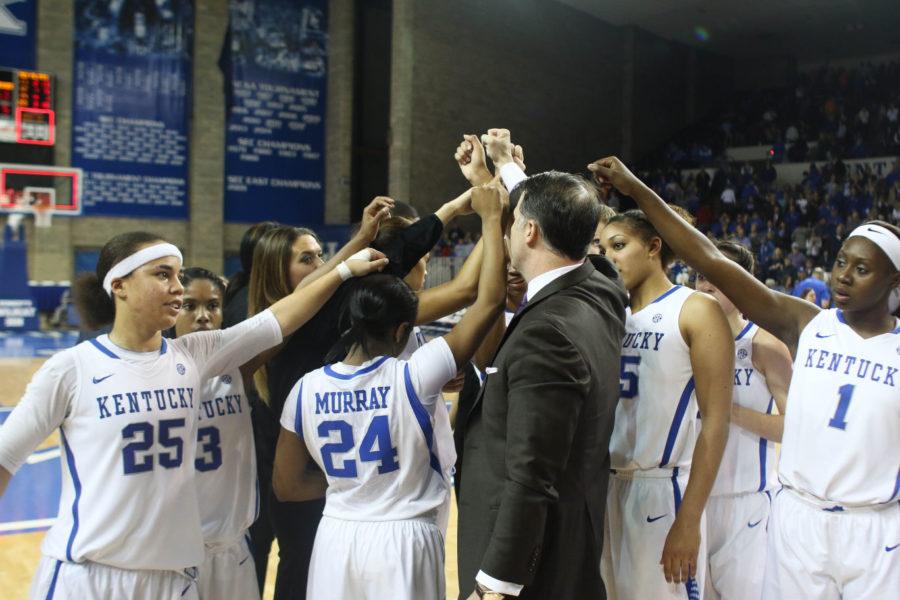 After getting a big win against No. 14 Miami (FL) the previous day, the No. 19 UK women’s basketball team came back to Memorial Coliseum Saturday evening to get their second win of the season against the Albany Great Danes, 70-46.

The matchup against the Danes was the first ever between the two schools, and the Cats used a combination of intense zone defense and scoring runs to open up a big lead before halftime.

In the first quarter, the Cats went on a 7-0 run in the middle of the quarter to open up an early 10-point lead. While that run was going on, Albany nearly went scoreless for final eight minutes of the quarter until Khepera Stokes put in a layup for the Danes with 30 seconds left to end the scoring drought.

The second quarter was a similar story with the Cats finishing the quarter on a 9-0, and keeping the Danes scoreless the final five minutes with that zone defense. The Cats would hold the Danes to only eight points in this quarter, which was the Danes’ lowest point total out of all the quarters.

The lack of scoring from the Danes can be attributed to the impressive zone defense head coach Matthew Mitchell just recently introduced to his team.

“I think it’s going to be a great defense for us,” Mitchell said. “The kids really hustle in it [zone defense] and play hard, they can make plays in it.”

While the Danes struggled to put points on the board, Evelyn Akhator was scoring with ease and was a big reason why the Cats led 36-19 at the half. Akhator scored 15 points and grabbed seven rebounds in just the first half.

Akhator would finish the game with a career high 28 points, and also grabbed 13 rebounds, securing her second double-double of the season. Akhator also blocked four shots, and was a perfect 8-8 from the free throw line.

“My coaches, they keep telling me I just need to kind of like, loft the ball, so that’s what I did,” Akhator said.

Normally fans are used to seeing Makayla Epps leading the charge but tonight was not her night. Epps would not score a point until the third quarter when she made a pair of free throws. Epps would not score her first field goal until there was five minutes left in the fourth quarter. Epps however dished out six assists to her teammates, which was a team high.

Picking up the slack for the Cats were Jessica Hardin and Makenzie Cann, who came off the bench. Both guards played big minutes and scored a combined for 14 points for the Cats.

After halftime the Cats started to struggle offensively as they only shot 31.3 percent from the court in the second half, compared to 46.2 percent in the first half. However the Cats closed out the third quarter on a 6-0 run, opening up their largest lead at the time of 19 points.

The Cats would open up the fourth quarter on another 9-0 run, virtually putting the game out of reach for the Danes as UK led by 29 points with 4:02 remaining.

Arguably, the Danes’ biggest strength is getting rebounds, but tonight the Cats were able to out-rebound Albany 44-40. Even after the impressive rebounding performance, Alyssa Rice sees room for improvement on crashing the boards.

“It’s something that were going to work on in the future and definitely get better at as the season goes on,” Rice said.

On Nov. 17, there will be a battle of the wildcats at Memorial Coliseum as the New Hampshire Wildcats come to Lexington to face Kentucky. Tipoff for that game is scheduled for 11 a.m.