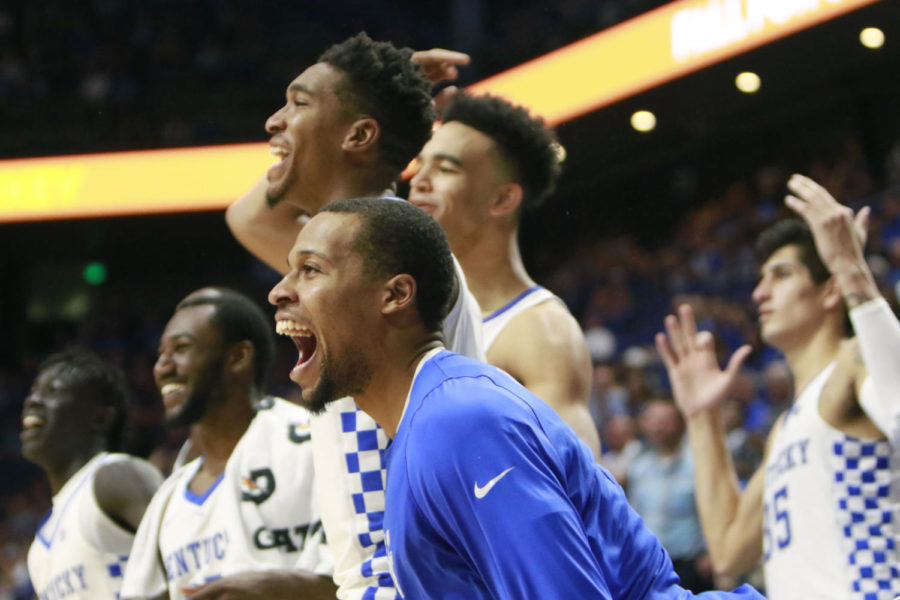 Members of the University of Kentucky men's basketball team celebrate Brad Calipari's three-pointer during the game against Clarion on Sunday, October 30, 2016 in Lexington, Ky. Photo by Hunter Mitchell | Staff

UK basketball’s season is officially underway in the bluegrass. After a huge 93-point win over Asbury in their final exhibition game of the year the Cats are preparing for their first regular season game against the Stephen F. Austin Lumberjacks on Friday at 7 p.m. at Rupp Arena.

The Cats’ freshmen duo of Monk and Fox is expected to be one of the most dynamic duos in the country this season.  Against Asbury the two combined for 40 points, with 25 of those points coming from Fox and 15 coming from Monk. Alongside of the duo is Briscoe who had 11 points with seven assists and four steals.

Making up the frontcourt for the starting lineup are forwards Adebayo and Willis who have both been dominant in the past two games.  In his senior season Willis is looking to lead this team on a potential national championship run.  Willis is a proven shooter and veteran for this young Cats team.

Next to Willis is Adebayo who has the potential to be one of the best big men in the country.  Even though he is only a freshman Adebayo is already showing that he is a force to be reckoned with in his dunking display against Asbury and Clarion.

The depth at the forward position is something that the team struggled with last season but doesn’t look like it will be an issue in this upcoming season with Willis and Adebayo leading the way.

Coming off the bench at those forward for the Cats, Gabriel and Sacha Killeya-Jones are not to be overlooked.  Against Asbury Gabriel had 16 points and 7 rebounds, and Killeya-Jones had 13 points with 5 rebounds and 4 blocks. Both fit the mold of long, athletic bigs that play well in Calipari’s system at UK.

UK also has seniors Dominique Hawkins and Mychal Mulder who have both been showing a lot of promise coming off the bench in the two exhibition games.  Mulder is coming off of a huge 20-point game against Asbury including one monster dunk that sent the crowd into a frenzy in the closing seconds of the game.

Stephen F. Austin is a new team coming into Rupp this Friday after three of their top scorers from last year’s team graduated.

This matchup will be the first time that the teams will play each other in the two programs’ histories.  A key returner for the Lumberjacks is junior guard Ty Charles.  Charles averaged almost ten points a game and five rebounds.  He was also a member of the preseason All-Southland Conference Second Team.

After ending their season with a 28-6 record the Lumberjacks look to come into Rupp and try to take down the Cats on opening night.

UK looked to shake off any early rust in its exhibition season, and now will look to start the regular season off strong with a win over Stephen F. Austin.