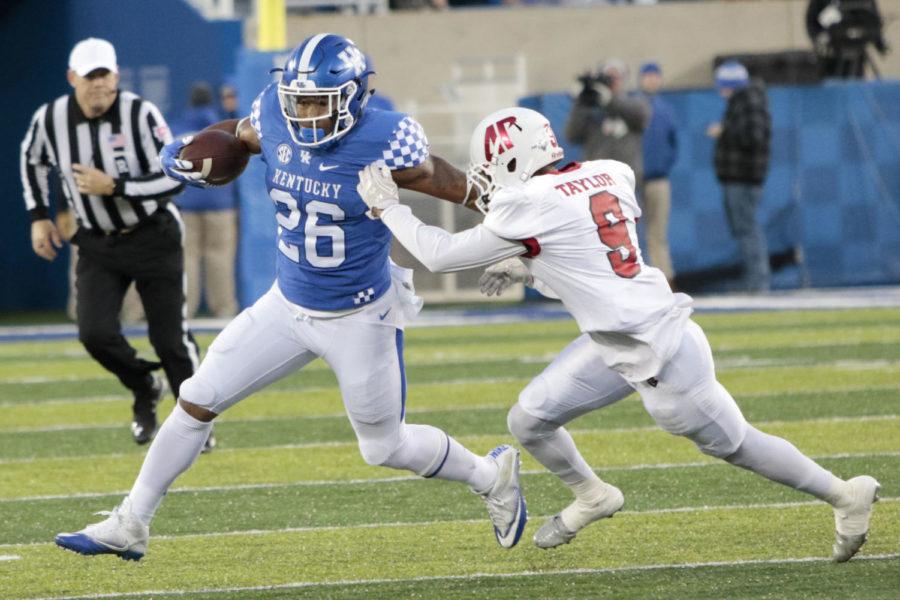 Kentucky running back Benny Snell Jr. runs by a defender during the game against Austin Peay on Saturday, November 19, 2016 in Lexington, Ky. Photo by Hunter Mitchell | Staff

Despite the early scare in the win 49-13 over Austin Peay, UK football should be able to relax some after finally reaching that elusive sixth win and capturing bowl eligibility.

Now, with only the rivalry game against Louisville left on its schedule, UK can enter the matchup without their season hanging in the balance. Something that could not be said the past two years, as the Cardinals handed the Cats losses to punctuate back-to-back 5-7 seasons.

The lack of pressure will surely help UK some as they head into Papa Johns Stadium next weekend to face the No. 11 ranked Cardinals, but the Cats will still face an uphill battle against their rivals. Especially when considering how UK struggled early against Austin Peay and throughout much of Mark Stoops tenure — defending mobile quarterbacks.

Before rattling off 49 unanswered points to regain control of the game, the Governors ran all over the UK in the opening quarter of the game. Austin Peay racked up 189 rushing yards in that time, and UK looked hopeless is most cases in stopping the Governors’ mobile quarterback Javaughn Craig as he rushed for 40 yards.

If Austin Peay was able to capitalize on UK’s weakness with mobile quarterbacks, then there is no telling what UofL’s Heisman front-runner Lamar Jackson will do to the Cats.

Jackson has been a human cheat code this season, empowering the Cards top-five offense with totals of 3,109 passing yards for 28 touchdowns and 1,367 rushing yards for 19 touchdowns. His talents matched with the offensive genius of head coach Bobby Petrino, have made the Cards offense seemingly unstoppable.

That run defense will be tested by the Cats, as their best chance for pulling off the upset will likely come behind the rushing attack of Boom Williams and Benny Snell.

The duo made history in UK’s win over Austin Peay becoming the first tandem to rush for over 1,000 yards in a season in the school’s history. Snell also broke the freshman single season rushing record in the game.

The ground game will be a big part of UK’s strategy against the Cards, but the Cats will also heavily depend on quarterback Stephen Johnson to keep the offense afloat. Johnson played through injury to spark UK’s turnaround against Austin Peay and his knee will be something to watch going forward as Stoops said he practiced very little this past week because of it.

Setting all the logistics aside, the rivalry matchup will take on a different tone for a change because of the opposite waves of emotion that both teams and fanbases will be riding.

The Cards will enter the game following a disappointing loss at Houston that removed them from the College Football Playoff conversation. UK enters after just reaching bowl eligibility for the first time since 2010 and first time under Stoops.

With the Heisman all but guaranteed to Jackson, the Cards have very little to fight for at this point with the CFP out of reach.

The Cats have already reached their goals for the season with a bowl game now in their future, but adding a win over Louisville for the first time since 2010 can only add to what’s already been a successful season.

“I was very thankful to come away with the victory. I thought our team really showed their toughness all season and it was evident again tonight. When we needed it, we got physical and the guys played exceptionally well,” Stoops said. “It’s been a season of a lot of ups and downs, and we got one big game left.”