Cats fall at home to Georgia on game-winning field goal 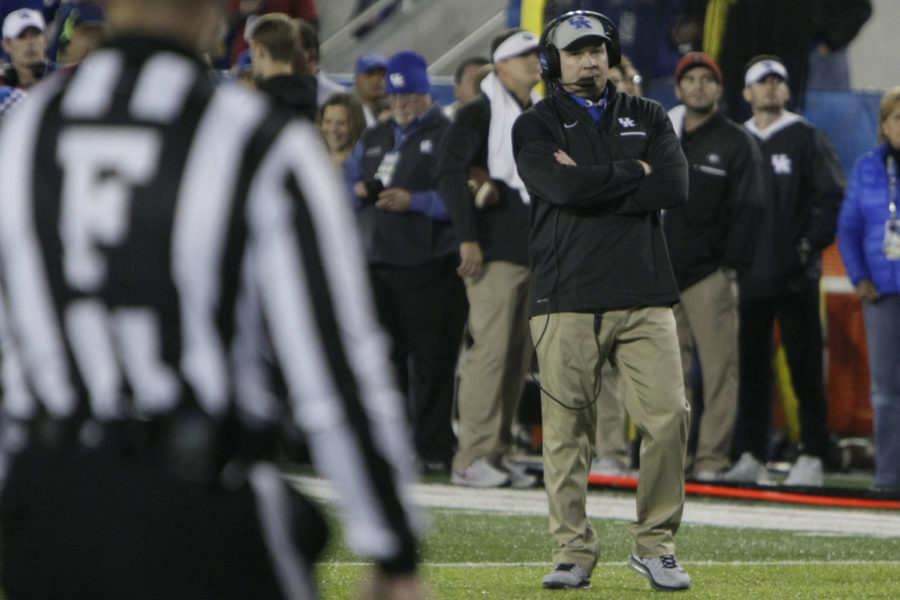 Head coach Mark Stoops walks down the baseline during the game against Georgia on Saturday, November 5, 2016 in Lexington, Ky. Photo by Hunter Mitchell | Staff

Looking to become bowl eligible for the first time since 2010, UK football came up just short to Georgia in front of a packed crowd at Commonwealth Stadium Saturday night. Bulldogs kicker Rodrigo Blankenship knocked home his fourth field goal of the night as time expired to Georgia the 27-24 victory.

“It was a very difficult loss,” head coach Mark Stoops said. “There’s a lot of disappointed people in that locker room, and I feel for them because I think, again, I think our hearts and our minds are in the right place.”

With the loss, the Cats will not be in the running for the SEC East title. Even though that was a long shot, a win Saturday night would have guaranteed that UK would be going bowling for the first time since 2006.

A sloppy second half proved costly for the Cats who led 14-13 at halftime, and again it was turnovers that held UK back. Despite leading the turnover battle 2-0 heading into the final 30 minutes, three costly turnovers came back to bite the Cats.

“We knew it was going to come down to whoever had the least turnovers. — We knew we had to protect the ball and we did not do that tonight,” quarterback Stephen Johnson said.  “We had some really good plays, one thing we need to work on again is protecting the ball.”

Perhaps the biggest play of the game was late in the third quarter when Johnson launched one deep intended for Jeff Badet who had a step on his defensive back, and looked to have caught the ball. Instead, the ball popped right out of Badet’s hands and into the arms of the Georgia DB.

On a play that would have most likely gone for a touchdown and given UK a 28-16 lead, momentum shifted dramatically to the hands of the Bulldogs.

From that moment on, it was clear that Georgia was beginning to cease control of the ballgame, regardless of the fact that the Cats had the lead with just under five minutes left in the third quarter.

Following a group of sloppy drives, the Bulldogs used a 7-play, 67-yard drive capped off by a 26-yard touchdown run by Sony Michel to grab a 24-21 lead with 9:12 left in the game.

On the very next drive, it looked as if Benny Snell Jr. was about to carry the Cats home and give them the lead late in the game, but the Bulldogs defense buckled down and held UK to a field goal.

Georgia freshman QB Jacob Eason then took the final 2:47 that UK gave him and led a drive right down the field going 4-4 on the game-winning drive. Once in field goal range it was just a matter of how far the kick would be, and thanks to a pair of good runs by Michel, the Bulldogs made it easy for Blankenship to boot it home.

As is the case with pretty much every loss, disappointment was a common theme throughout the locker room post-game, and it was evident that the players felt that they let one get away.

“I could have ran harder,” Snell said following the game. “I could have ran somebody over, I could’ve done something better and I didn’t do that. I failed and I’m going to do better next week.”

While the true freshman was clearly hard on himself after the game, Snell showed yet again that he has the makings of a special player; rushing for 114 yards on 21 carries and a pair of touchdowns, breaking Randall Cobb’s freshman scoring record.

Not only was it Snell who felt that the team let one slip, but the UK defense spent 34 minutes on the field, and that only made things harder.

“We were on the field a lot, but it’s no excuse to be tired,” defensive back Marcus McWilson said. “You have to have the will power, you have to be willing to fight through when you’re tired.”

Despite the loss, UK is only one win away from becoming bowl eligible with three games to play including the final home game against 0-9 Austin Peay. And although being on the losing end in front of the home crowd is tough, it will be crucial that the Cats are able to move on and continue to go week-by-week.