UK’s defense takes a hit in loss to UCLA 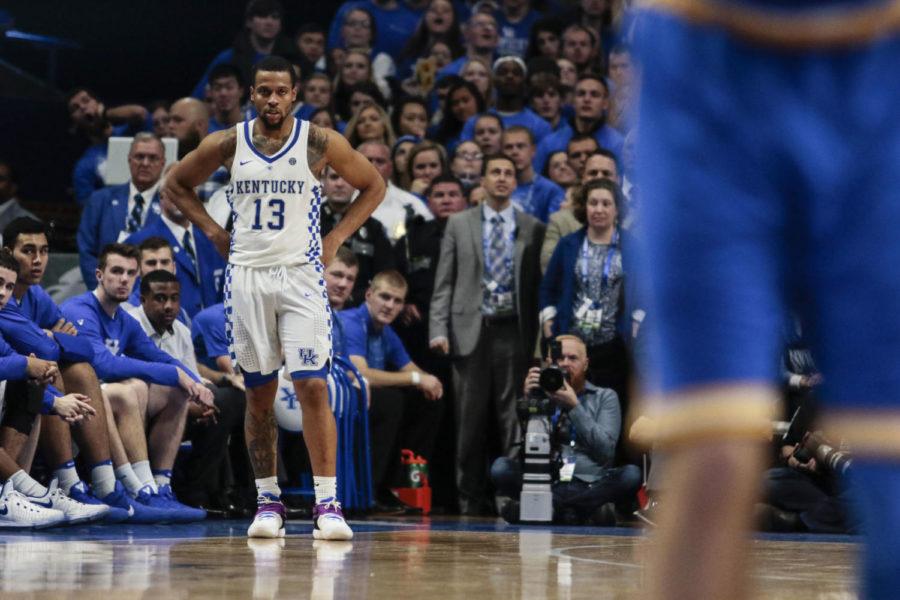 Kentucky guard Isaiah Briscoe watches as a UCLA player shoots a free throw during the Wildcats' game against the UCLA Bruins at Papa John's Stadium on December 3, 2016 in Louisville, Kentucky.

For the second year in a row a No. 1 ranked UK basketball team was handed its first loss of the season by UCLA, this time in a 97-92 loss in Rupp Arena to the No. 11 Bruins. The game was full of offense, but as UK head coach John Calipari stated after the game, it was lost by a lack of fight and defensive effort from the young Cats.

Entering the game, more credit was given to the UK defense, but once the ball was tipped, the narrative quickly switched from “How is UCLA going to score on UK?” to “How can UK slow down UCLA?” In the end UK’s defense wasn’t able to slow the Bruins and its efforts of just keeping up with them fell flat in the loss.

“There are great lessons out of this. I wish we would have come back and won. I would like to learn from that lesson a little bit more,” Calipari said. “But sometimes you need to get hit in the chin, especially at home.”

The hit that ultimately left the Cats down for the count came in the second half. The Bruins used a 10-4 run to close the first half with a 44-41 lead and they followed it up with a hard-fought half to build on and close the game out.

The Cats played rushed and out of control for most of the second half on offense, but on the defensive end was where their play really doomed them, as they had no answers for stopping the Bruins.

“But it all comes back to the same thing: we didn’t have discipline defensively, we just didn’t,” Calipari said. “We fouled on drives instead of giving them space.”

Drives from UCLA sliced through the UK defense all afternoon and while the young guards for UK often complained about foul calls or the lack thereof, the Bruins guards made shots from outside and at the line to build the lead.

The team obviously wants to learn from the loss, and the biggest thing that should be written on the chalkboard for the lesson is that just having good size and length doesn’t automatically make you a good defender. The speed of UCLA’s ball-handlers gave UK trouble and the guards trying to play defense with their hands rather than moving their feet resulted in the success from the Bruin backcourt.

Other than the guards, UK’s frontcourt also struggled as they allowed UCLA junior big man Thomas Welsh to have another big game with 14 points and eight rebounds. And they also let freshman TJ Leaf go off for 17 points and 13 rebounds (four offensive).

“I have to give them credit. To come in this building, to come in and do what they did to us,” Calipari said. “They manhandled us, they physically manhandled us.”

Wenyen Gabriel was able to have some success on the offensive glass for UK but he only finished with two points. UK tried to play through Bam Adebayo during their comeback effort but he had trouble finishing inside going 4-for-12 for 18 points and 13 rebounds.

A late burst from Malik Monk gave UK some hope, but the game had already been lost at that point.

The first loss stings for the Cats but it is still December and there is a lot of basketball to be played. This, rather than the Michigan State game, was UK’s first real test and stopping an offense like UCLA’s was just too much to ask of UK at this point in the season.

“That’s why you play a season. The great thing about college basketball is you’d like to learn from close wins, but sometimes it doesn’t work that way,” Calipari said. “You got to learn from a loss. That’s what we’ll try to do.”