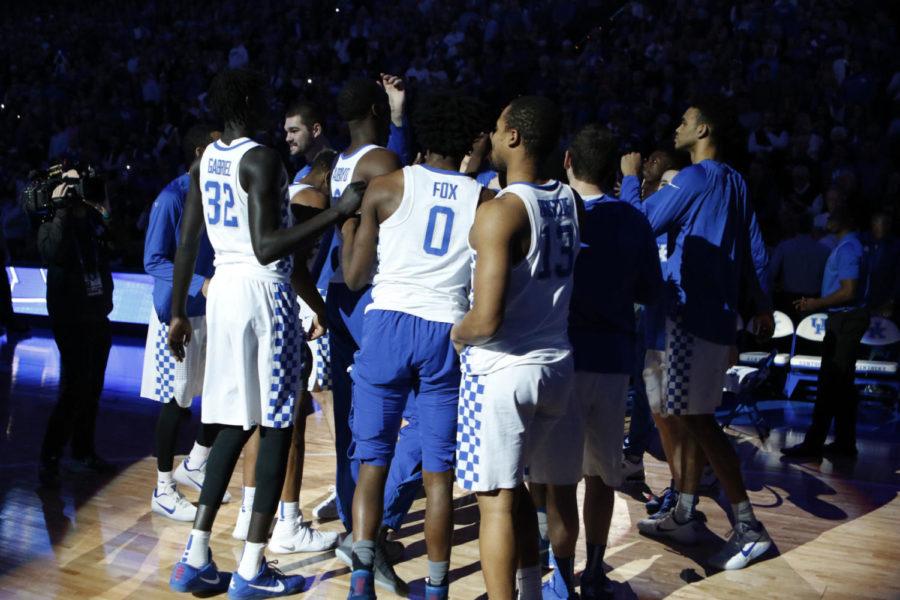 The Kentucky Wildcats huddle prior to the game against the Auburn Tigers at Rupp Arena on Saturday, January 14, 2017 in Lexington, Ky. Kentucky won 92 to 72. Photo by Arden Barnes | Staff

No. 6 UK managed to pull out the 92-72 win against the Auburn Tigers Saturday afternoon at Rupp Arena. Although it was not an easy battle for the Cats with a slow start and foul trouble, their ability to shoot and defensive improvements played a big role in bringing home the victory.

The Cats struggled early on and couldn’t seem to really open things up. The slow start prompted a timeout early in the half. The 30 second break looked to trigger a change in the pace of the game.

In less than one minute Gabriel, Fox and Monk handily put 8 points on the scoreboard that ensured the lead for the remainder of the half.

The Cats looked weak from the free-throw line with 54 percent, but 58.1 percent shooting from the field gave UK a 51-40 lead a the half.

Despite De’Aaron Fox fouling out with seven minutes to go and Isaiah Briscoe dealing with foul trouble for nearly the entire game, the Cats managed to pull out the win.

This isn’t Monk’s first time being the MVP, as he scored 34 at Ole Miss as well as his 47-point outburst against North Carolina, but his explosiveness and shooting caused the Tigers problems all afternoon.

Monk used his arsenal of shots in the first half that made him a versatile threat as always for the Cats. Monk finished the half with 12 points, and in the second half doubled scoring on the board, finishing the game with 24 points.

And despite a slow at the start of the second half, Monk found his stroke and he showed his strengths once again on Saturday.

Briscoe increased the momentum of the game after he hit a three-pointer that gave the team a seven point lead after Auburn’s T.J Dunan’s rattled off 10-straight points to cut the UK lead to four. From this point on, the Cats only increased the Tigers deficit.

The shot from Briscoe is one that should be looked at as the type of shot one would expect a veteran player to hit. And despite being only a sophomore, in John Calipari’s program, sophomores are expected to take that leadership like role.

Gabriel has been a quiet player in the past, only averaging 5.4 points and 5.4 rebounds, but got off to a quick start Saturday hitting his first two threes of the game. In the first half Gabriel had 6 points and 7 valuable rebounds.

Gabriel’s missed free-throws caused him to miss his opportunity to get 6 points and 16 rebounds. But despite just six points, his presence was felt

“You’re a double-double if you make a free-throw,” said head coach John Calipari.

Overall, Gabriel as a whole has continued to grow stronger, as a player, after each game.

The Cats looked weak from the free-throw line tonight, as they shot 53.8 percent in the first half.

The struggle for the team only progressed as the average lowered to 53.1 percent. The Cats gave up 15 free points, which could have turned a battle to a blowout.

Cal said that when free-throws are missed, “it’s contagious.”