Cats take care of Auburn, move to 5-0 in SEC play 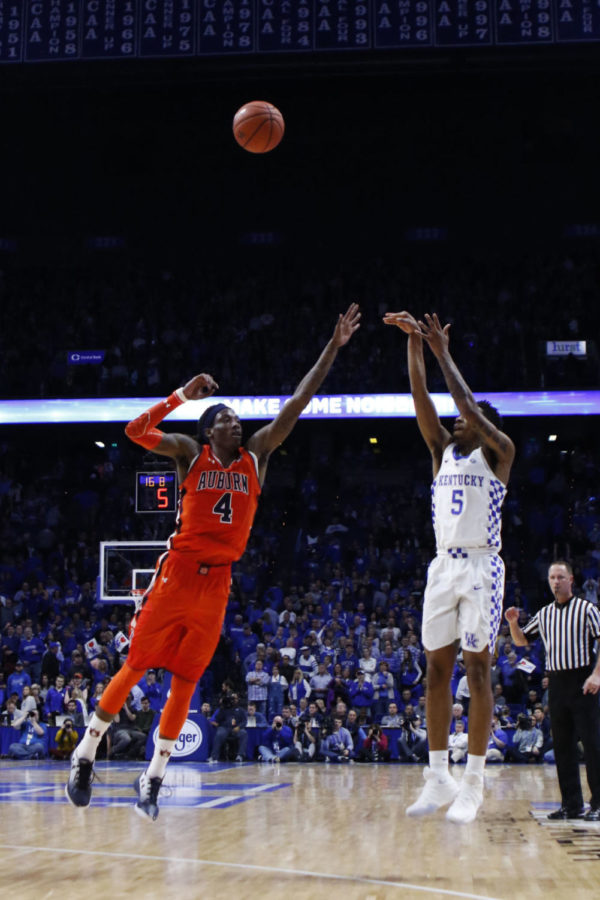 Kentucky Wildcats guard Malik Monk shoots a three during the second half against the Auburn Tigers at Rupp Arena on Saturday, January 14, 2017 in Lexington, Ky. Kentucky won 92 to 72. Photo by Arden Barnes | Staff

On the biggest day of college basketball so far this season, No. 6 UK did its job when it came to taking care of a conference opponent on its home floor just as Louisville, North Carolina and Kansas did earlier in the day, beating Auburn 92-72.

Unfortunately for fans, it was another whistle blowing contest as the two teams were called for 49 combined fouls. And aside from the obvious foul issues that came with the whistle-blowing, the Tigers made things difficult on the Cats thanks to 23 points from T.J. Dunans, 15 of which came in the second half.

Despite Dunans and the Tigers’ best efforts it was again another UK guard who would not allow the team to lose just as they did on Tuesday at Vanderbilt.

Malik Monk poured in a game-high 24 points on 8-14 shooting including 4-8 from deep, and it was his late scoring spurt with some highlight-reel plays that proved to put the game out of reach for good. And although it was an even split of 12 first and second half points for Monk, it was his play down the stretch that made a difference.

A 20-point performance from Monk is nothing new, and it is something that many have become accustomed to, but what fans are not accustomed to is seeing De’Aaron Fox on the bench in crunch-time. Fox fouled out for the first time this season finishing with just 13 points, five assists and four rebounds and left Monk and Isaiah Briscoe to carry the load for the seven remaining minutes of the game.

As was the case Tuesday, it was another case of willing the team to victory for Briscoe as his three-pointer after Auburn cut the lead to four with 7:44 left, proved to be the momentum shift that UK needed as it went in to cruise control from that point on. And with Briscoe being the leader that many envisioned, and Monk being the scoring threat that he was hyped up to be, Mychal Mulder and Wenyen Gabriel also stepped their games up Saturday.

Mulder contributed 12 points on 3-5 shooting off the bench, and Gabriel was the defensive/rebounding force that many had expected, grabbing a game-high 16 rebounds to go along with a pair of blocks, and numerous impacted plays on the defensive end.

“I thought (Mulder) played well,” coach John Calipari said after the game. “That’s as good as (Mulder) has played. And it’s good, because we need that, like in this kind of game.”

‘This kind of game,’ is what UK has had to deal with in back-to-back matchups, and going forward dealing with foul trouble the right way and having guys step up will be big for this Cats team moving forward. But one thing is for sure, and that is having a guy like Monk who can step up at score at any time in any possible way is big for any team, especially one with national championship hopes.