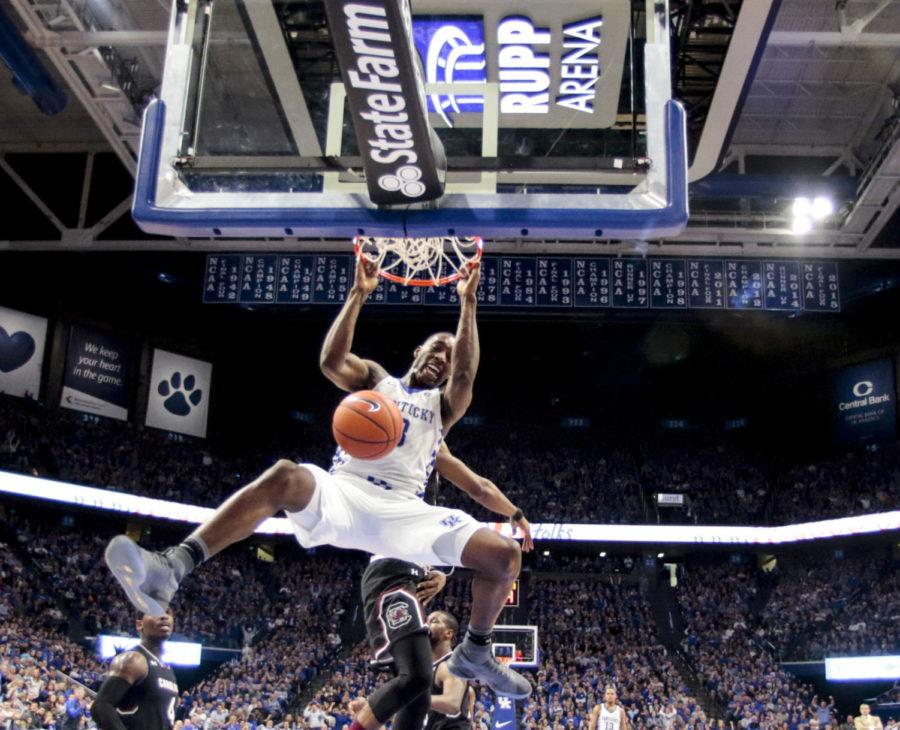 during the Wildcats game against the South Carolina Gamecocks at Rupp Arena on January 21, 2017 in Lexington, Kentucky.

After a hard fought game, No. 5 UK pulled out the victory at Rupp Arena Saturday evening against SEC rival No. 24 South Carolina 85-69.

After being up 17 to start the first half the Gamecocks fought their way back into the game to be within 3 points of the Cats.

Early in the first half freshman guard De’Aaron Fox left the game with a rolled right ankle which put the Cats in a tough predicament and they were also without senior guard Mychal Mulder due to illness. After losing Fox the Cats went scoreless for three minutes, committing 5 turnovers during that stretch.

Four Cats finished the game in double figures on the night.  This win against South Carolina gave the Gamecocks their first SEC loss on the season.  The win also helped solidify the Cats at the top of the standing in the SEC this year.  UK is currently undefeated in conference play so far this season.

Here is a breakdown of how things went:

Monk is used to high scoring games in his brief time at UK.  After having 34 and 47 points in two games this season, Monk stole the show finishing with 27 points shooting 9-14 from the field, and 4-7 from deep.

On the season the freshman is averaging 21.4 points per game.  He is currently averaging the most points in a season by any player in the John Calipari era here at UK. This was his 11th twenty point game on the year in only 19 games. His hot hand has helped the Cats immensely this season.

Turning Point: 7-0 run early in the 2nd half

Forward Derek Willis brought the house down with a ferocious slam on a South Carolina defender that added onto the Cats 7-0 run in the first four minutes of the second half.  The run was started by Bam Adebayo getting to the free throw line and following the dunk by Willis the run was capped off by a layup by him as well.

Only averaging seven points this season Willis was a huge spark for the Cats off the bench.  Willis finished the game Saturday night with 12 points which included one monster dunk that will be a Top 10 play on TV for weeks to come.

To go along with his points Willis was also able to pull down seven rebounds which was a game high for the Cats.  The experience and leadership that he provides off the bench for the Cats has been a huge help this season.

Only a sophomore Briscoe is regarded to be the leader of this young Cats team.  Coming off of a 12 point outing against Mississippi State he was held scoreless in the game against the Gamecocks. And not only was Briscoe held scoreless, he also turned the ball over seven times and after the game, coach John Calipari said he is “concerned” about Briscoe’s play.

Attempting only two shots on the game Briscoe will be needed for the Cats and their success in the future for them to be successful.  Look for him to be more aggressive in the game next Saturday at home against No. 2 Kansas.