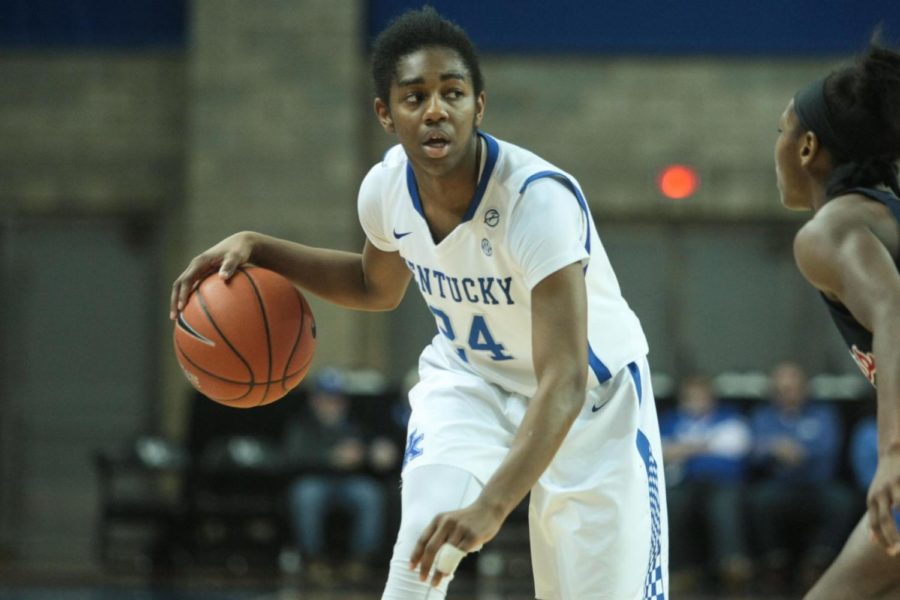 Kentucky guard Taylor Murray directs the offense during the first half of the game against the Ole Miss Rebels at Memorial Coliseum on Thursday, January 26, 2017 in Lexington, KY. Photo by Addison Coffey | Staff.

Monday evening’s matchup between the UK women’s basketball team and the Missouri Tigers was a battle between two of the hottest teams in the Southeastern Conference. Both teams brought in win streaks of at least four games, and Mizzou would be the team to keep their streak intact, as they defeated the Cats 73-67.

The Cats struggled to get going early, shooting just 38 percent in the first half, but would wind up taking a one-point lead with them into halftime. With shots not falling, the only way the Cats kept the score close was with free throws.

The Cats made 11-12 free throws in the first half, compared to just two free throw attempts from Missouri. Taylor Murray scored most of those free throws, making all eight of her attempts and setting a new career high in free throws made. Murray would finish 10-10 from the line.

In the second half, it would be Mizzou who took frequent trips to the foul line. The Tigers passed the ball to their paint players frequently, which spelled trouble for the Cats who only have two true post players on the roster.

Evelyn Akhator and Alyssa Rice spent most of the second half in foul trouble because of Mizzou’s aggression in the paint. The duo spent good chunks of time on the bench, which gave Cierra Porter of Missouri complete control of the paint.

Porter would score 13 of her 17 points in the second half, while going 11-11 from the charity strip.

Mizzou as a team made 18-22 free throws in the second half, making it very difficult for the Cats to keep the scoreboard close. Whenever the Tigers were not scoring free throws, they were getting easy layups as they scored 30 points in the paint against the Cats

With the bigs not doing much for UK, the frontcourt had to pick up the slack if the Cats had any chances of winning. Murray and Makayla Epps certainly did their part, but it was not enough to slow down Mizzou.

After Murray’s big second quarter, she would finish with 18 points and 13 rebounds, her second double-double of her career, with her first coming just over a week ago at LSU. Epps would add 20 points herself, her eighth 20-point game of the season.

The Cats have had issues in the paint before, and that is what ultimately led to their loss Monday evening. However, Mizzou is a team on the rise in the SEC, so losing to the surging Tigers on the road is not the worst loss on the schedule.

The Cats should still have loads of confidence in themselves, and they will need it when they face No. 4 South Carolina in just three days at Memorial Coliseum.